Athlete, Know What Fuels You

Then David said to the Philistine, "You come to me with a sword and with a spear and with a javelin, but I come to you in the name of the LORD of hosts, the God of the armies of Israel, whom you have defied.”

During the 2003-2004 NBA season, the Los Angeles Lakers made an unprecedented move. They acquired Gary Payton and Karl Malone to create the first super team of its kind, a team starting four future Hall of Famers!

Karl Malone, Gary Payton, Shaquille O’Neal and Kobe Bryant were the sure-fire favorites to win their fourth consecutive championship. It only made sense since they’d already won three consecutive chips with arguably less in terms of talent.

Yet there was a team in Detroit that had something else in mind. The Pistons were not a team to ignore. Under Joe Dumars’ management and Larry Brown’s coaching, the team had become quite the contender. Still, very few believed that they would defeat the retooled three-time champion Lakers.

And yet, the Pistons did defeat the Lakers in a decisive four games to one. Whenever the starting five players for that championship team were asked why they played so well against even the best competition, they would almost always say that it was because they sought to play together.

In our passage from 1 Samuel, David was the overwhelmingly out-matched underdog. Not only was he a child, but we get the impression from the Bible’s description of him that he was a smaller-than-average child. He may have been handsome, but beyond that, he was not a physically imposing person.

Goliath, on the other hand, was so big that he made Israel’s entire army cower. Standing about nine feet tall, he was a literal giant and champion fighter. He’d seen his share of battles and stood undefeated. However, much like the Pistons, David had something else in mind.

David believed in the God who was greater than Goliath’s shield and sword. Empowered by the God in whom he believed, the young, unimposing and unarmored David, killed the giant with a slingshot and a smooth stone.

How did David win this battle? What fueled his victory? For David, it was His trust in the God who is greater than him and greater than all.

When we are competing on the field or court of competition, victory will always require that we believe in more than just ourselves. We have to trust our teammates, our coaches, our trainers and the hard work of preparation.

The same can be said for the Christian and his or her walk. None of us lives to ourselves. We can not live out our faith on our own. We must look to our God who is greater than all, in order to persevere through the difficulties of life and to ultimately have victory over them.

When we believe that Almighty God has our backs, we can be like David and say to any giants in our lives, “This day the LORD will deliver you into my hands” (1 Samuel 17:46 NIV). 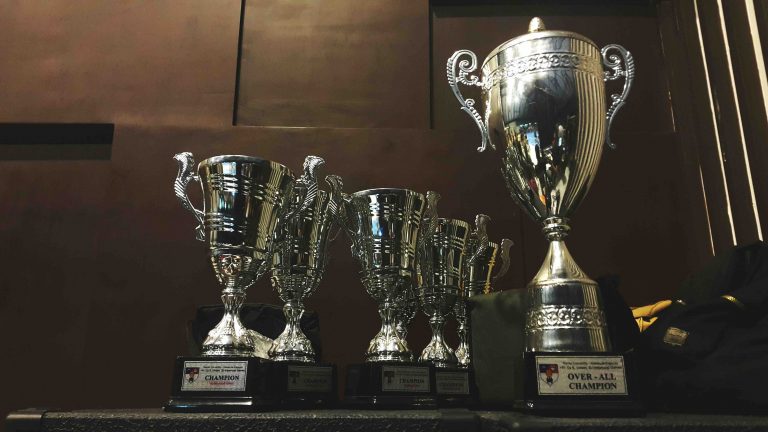