Ernie Johnson Jr. remembers exactly where he was when he decided to trust Jesus with his life. It was in 1997 at an O’Charley’s, while eating lunch with his pastor.

“It was a life-changing day,” Ernie remembers. “Only at that moment was I able, from that point on in my life, to switch from having a me-centered life to a God-centered life.”

After graduating from the University of Georgia, Ernie worked with various local news outlets as a sports reporter and news anchor before becoming the studio host for TNT’s Inside the NBA in 1990.

After his decision to trust Jesus in 1997, Ernie made the decision that his career and his whole life shouldn’t be about himself.

“This broadcasting career … it was all about me. And it was such a change in 1997 on December 10, to a Christ-centered life, to a purpose-filled life.”

It was Ernie’s faith in God that he chose that day that would carry him through the challenges to come.

“Twice in my life I’ve had a doctor look across the table from me and say ‘you’ve got cancer.’ Twice. And it’s that faith that sustains you. It’s that knowledge, it’s that verbalizing, it’s that knowing here and here, I’m going to trust God, period.”

“It’s not ‘I’m going to trust God if this next test comes back and says hey, you don’t need chemo.’ No. [I need to trust God] when they say ‘no, we’re going to start that,’” says Johnson. 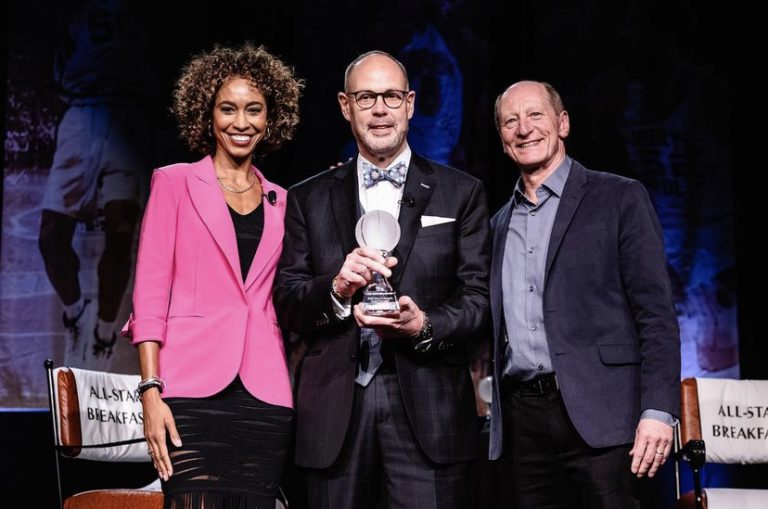 Ernie not only had to trust God with his own life, but also with the life of his son. Ernie and his wife, Cheryl, have six children, one of whom recently passed away.

Michael Johnson was adopted from Romania at age three. He had muscular dystrophy, developmental delays, and was on a ventilator for his last ten years, but he lived a miraculous life and started a movement that spread through his high school in Braselton.

The coach of his high school’s basketball team, Philip Bollier, recruited Michael so his team could learn to have a heart for others and give maximum effort. Because of Michael, the sign language symbol for “Love you, too,” spread through the school.

“Only God takes a basketball coach from Indiana, puts him in Braselton, Georgia, connects with a kid who was born in Romania and adopted into this high school and teaches a whole school about love,” Ernie shared at a recent Athletes in Action event.

“And it’s only God who sees you through the loss of that kid. God promises He’ll walk through it with you. And some of those days I got a pretty good spring in my step, and other days I’m limping.”

For Ernie Johnson, trusting God means focusing on the things that matter. He calls these ‘the blackberry moments.’ The term originated from when Ernie was a nine-year-old playing Little League Baseball. A kid on the other team hit a ground ball. It went over the fence, and the left fielder and center fielder went to go find it.

When the rest of the team looked for the ball and the missing players, they found the left fielder and center fielder eating blackberries and enjoying themselves.

“It became a modern-day parable for me,” says Johnson. “Sometimes, you’ve got to be able to step away from the game and appreciate the blackberry moments. Those unscripted moments that make your life unpredictable, that make your life extraordinary.”

Ernie practices what he preaches. He intentionally takes time to notice and talk to people. Every week, he buys two bouquets; one for his wife and one to give to a random person in the parking lot of Publix.

His coworkers on “Inside the NBA” see the impact he’s making.

“Looking at [the Bobby Jones award requirements] faith, character, leadership and achievement: You’re four for four. You and Cheryl are two of the most amazing parents in the world,” Kenny Smith, a fellow Inside the NBA commentator, said during the presentation of the Bobby Jones Award.

Johnson was honored on February 19 at the 15th Annual Athletes in Action All-Star Breakfast in Cleveland, Ohio. He received the Bobby Jones Award, named after Jones, the retired 76ers player, for his character in his work and personal life.

Athlete, How Does God See You?