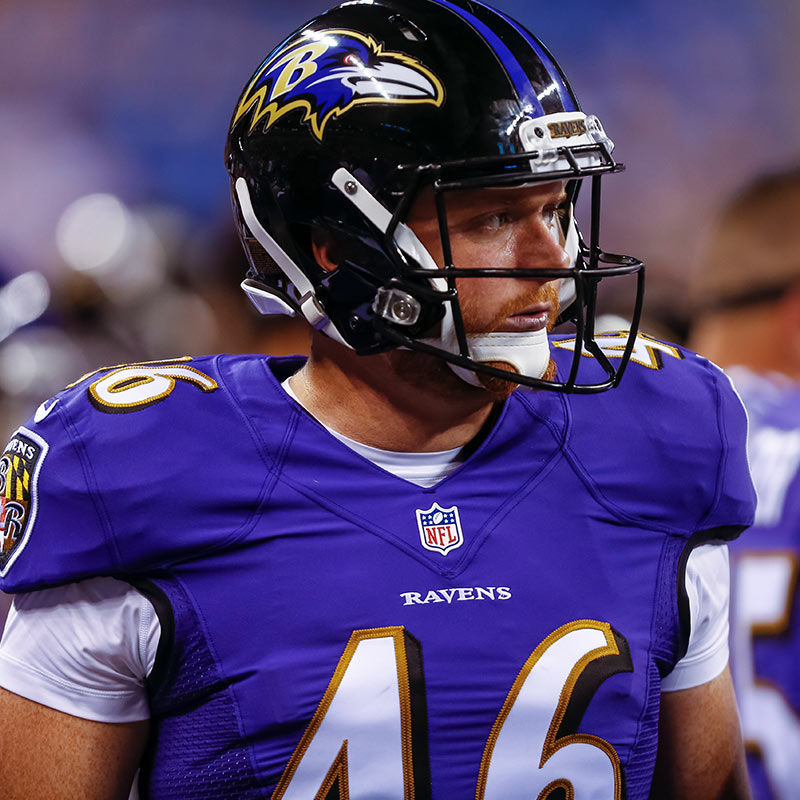 The Best Thing I Learned From: Morgan Cox

The players in the Baltimore Ravens’ locker room celebrated. They just shut out the Bengals 20-0 in Cincinnati in the season opener. Coach Jim Harbaugh was so excited he could barely stay focused. He went around and gave high fives and hugs to everyone.

I stepped over some shoulder pads after I chatted with Benjamin Watson for a bit and made my way to locker No. 46.

Morgan Cox was getting dressed when I popped my head around and asked if he had a minute or two to talk.

“You want to talk to me?” he answered. “I’m the long-snapper. No one talks to me unless I mess up.”

The two-time Pro Bowler from the University of Tennessee was exactly my target.

What he said was profound and perfect. I had done some research on a few players I wanted to include in a project I have in the works, and he was one of them.

Morgan stays focused on his job and responsibilities and keeps his life prioritized. His position is crucial, yet he does not reap glory or appear on ESPN’s top play highlights.

Most people probably have not heard of him because he does not warrant top-of-the-fold headlines.

But if he makes a costly mistake, his name might garner unwanted recognition. For instance, many MLB fans remember Jose Canseco’s attempt to catch a fly ball at the fence in right field. The baseball bounced off his head and over the fence for a home run.

Or remember Jackie Smith, a well-rounded and talented tight end for the Dallas Cowboys, who dropped the potential game-winning pass in the end zone in Super Bowl XIII? Pittsburgh won the title 35-31. I was sick because I cheered for America’s Team.

Morgan likes the obscurity he holds in the NFL. He doesn’t need the fanfare or accolades. He has a Super Bowl ring and a fantastic career.

“I just do my job every day, and I love it,” he said. “I don’t worry about the praise and glory—that goes to God anyway.”

The long-snapper has overcome some adversity in his life. He has torn both ACLs over his career but kept his head down and plowed and snapped through.

Maybe there is something to just possess the attitude to perform well every day.

“Therefore, my beloved brethren, be ye stedfast, unmoveable, always abounding in the work of the Lord, forasmuch as ye know that your labour is not in vain in the Lord.” I CORINTHIANS 15:38

I played sports and always liked to see my name in the paper. I have a scrapbook full of “the old glory days.” Those were important back then and still hold a little value today—to me. But I didn’t participate for that reason. That same holds true as a Christian. I don’t go to church to be seen, and I don’t volunteer to receive a trophy. I do it because it’s how I’m supposed to serve. As long as God approves and is happy, I’m satisfied.

The best thing I learned from Morgan Cox: Whatever you do for the Lord, be content. You don’t have to be the star player to please God. Every team and church needs people like Morgan. He is dedicated to helping his squad be victorious while he does the grunt work. Are you willing to play your role?