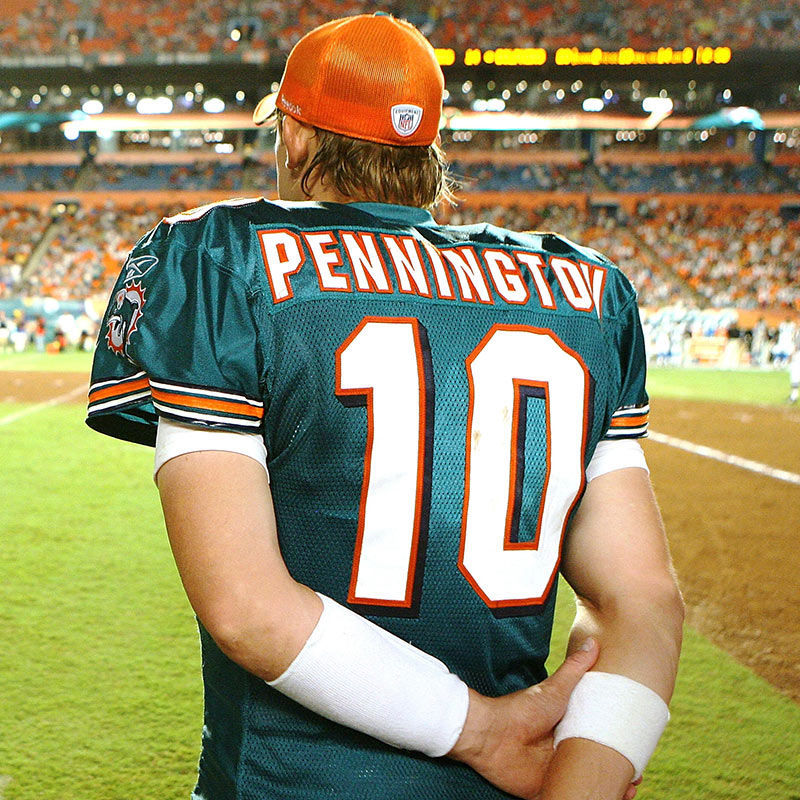 The Best Thing I Learned From: Chad Pennington

MINNEAPOLIS – Hatred: To feel intense or passionate dislike for someone or something. What has to simmer in a person’s soul to bring about such an intense feeling?

I’ve always been told you have to love what you do, and this is especially true for athletes. In order to be successful, a player must love the sport in which he or she participates to be good at it.

But this is not always the case.

Andre Agassi wrote in his book that he hated tennis, even though he was the best for several years. Joe DiMaggio could not stand to play baseball, but he admitted he loved the money and limelight associated with being a star player for the Yankees.

But what events flip the switch in the minds of athletes who have poured their lives into a sport in order to be great? Young kids have the dream to make it to the NFL and be a star. What causes the star to go out?

Does the pressure from parents to be the best or the media’s relentless pursuit for time dampen the flames that once burned brightly within the soul of a player?

According to an article in Fortune Magazine, nearly 20 percent of NFL players go bankrupt after they retire. Another piece in Rolling Stone states a large number of players are sacked with depression once they leave the league.

Chad Pennington has not lost his money, but he did lose his passion for the game while he played.

What was once his “god” became his demon.

Chad was a successful quarterback at Marshall University and had a solid career with the New York Jets. He was twice named the NFL “Comeback Player of the Year,” which is rare. But he was benched toward the end of his career, which called the demons of discouragement out in full force.

“It was a personal furnace so to speak,” he told me the day before Super Bowl LII in Minneapolis.

He was burned out, but as he later described, it was in a good way.

The same people who encouraged him were the same ones who turned their backs on him when he didn’t perform to their standards. He compared it to the “What have you done for me lately?” attitude.

“The game I loved as a kid and in college and for most of my NFL career, I hated at the time,” he said. “I hated everything about it. I never experienced the feeling of not being wanted before, and it hit me hard.”

But God wanted him more.

Chad went through the valley of discouragement for a reason. This gave him the opportunity to figure out his value and purpose in life.

“I had to get down on my hands and knees and seek God,” he said. “I had some lonely times for a while where I felt like everyone abandoned me, except for my close friends and family.”

Chad was fortunate enough, if you can describe it that way, to experience the loneliness before he exited the league.

Many players get blitzed and tackled by depression after they leave the glamour of the NFL. “I’m not sure if I could have handled it the way I did after I retired,” he said. “When your identity as a player is wrapped up in football and then taken away, that’s tough to deal with.”

He is now a consultant with the NFL Legends Program which helps players deal with life after football.

The program is an avenue for the league to come to the aid of athletes who find it difficult to adjust to a post-NFL existence.

Chad is thankful for his career, but he is more grateful for how the Lord is using him to help his colleagues cope with life.

“I’ve been able to come out on the other side and allow the game to be a blessing to me,” he said. “I have a tremendous opportunity now and a platform to enjoy it. I am able to use this now for His glory and not mine.”

The Best Thing I Learned From Chad Pennington: I witnessed the glitter of the Super Bowl and how players are worshipped by some fans. The cameras pop and autographs abound. I can see where a feeling of being forgotten can supersede self-worth when it’s gone. God had his hand on Pennington and put him through the fire for a reason. His experience now helps those who will go through a similar feeling of being an outcast.

Chad, who finished in second place for the NFL MVP Award in 2008 behind Peyton Manning, knows his purpose. He relates to the fire because he went through it and came out molded the way the Lord wanted. I too have gone through times of discouragement and wondered about my existence. The fire may be hot, but it will shape you if you look deep into the flames.

“If any man’s work shall be burned, he shall suffer loss: but he himself shall be saved; yet so as by fire. Know ye not that ye are the temple of God, and that the Spirit of God dwelleth in you?” I Corinthians 3:15-16