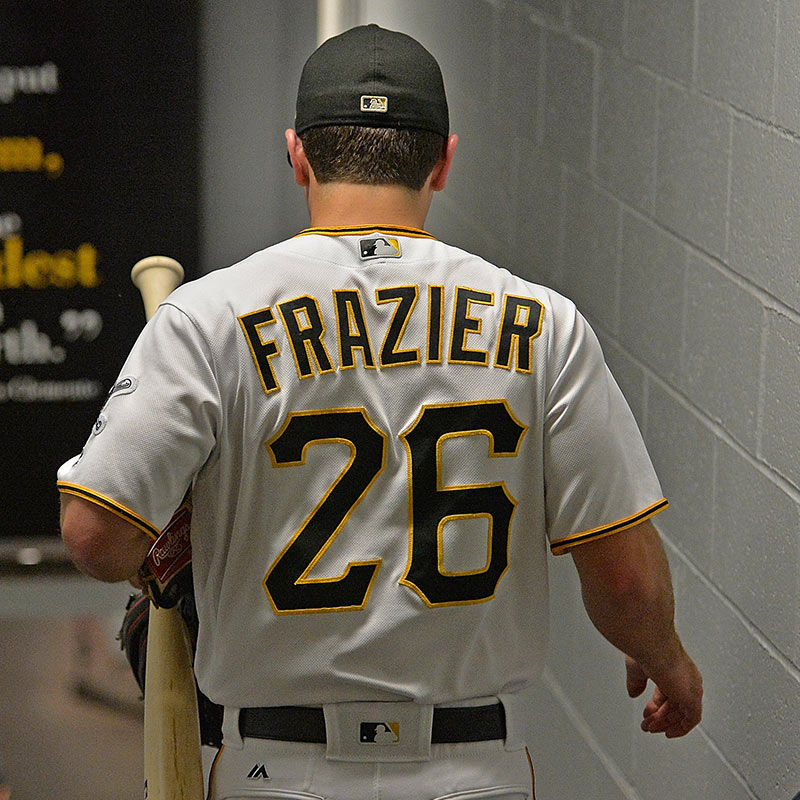 The Best Thing I Learned From: Adam Frazier

BRADENTON, Fla.- Spring training is here. That means the Boys of Summer are out in full force in hopes of finding a spot on the roster of an MLB team.

I recently spent a day at LECOM Park, home of the Pittsburgh Pirates, and took in one of their games against the Boston Red Sox.

A gorgeous day—the weather a perfect 80 degrees, the place packed with baseball fans. The park is one of the finest Spring Training facilities around. It’s right in the middle of the town of Bradenton, Florida, so many people can walk to the field.

After I spent some time in the clubhouse, I decided to take a stroll around the park. There is a wooden walkway around the outfield to give you a perfect view from anywhere. I made my way to left field and chatted with a few fans.

I spoke to Brian, a dad who skipped work to bring his four-year-old daughter, Emily, to her first Big League game. They sat in center field and enjoyed ice cream while she held tight to her souvenir baseball.

The atmosphere was festive, and people lined the concession stands for chips, hot dogs and drinks. Folks of all ages wandered around and welcomed the sound of baseballs hitting leather and the crack of the bat.

But along with the appeal of America’s past-time, there is a downside—a real temptation that exists for many of the players. Pirates second baseman Adam Frazier candidly admits that he faces this enticement every day, but he also shares his strategy for battling this spiritual warfare. . “Lusting can be a real struggle for me, and for a lot of guys,” he said. “It can be difficult at times, because it’s a real weakness.”

Lust comes in many forms. We can desire recognition, money, power, and knowledge. But in this case, Frazier acknowledges the struggle with sexual temptation, one that starts with seeing, transitions to imagining, and in the worse case scenarios, ends in adultery.

And who better knows a person’s weakness than Satan? He is aware of what can force a man to discard his values and plunge into a decision that could have significant negative ramifications.

The images are unavoidable. There is no shortage of tank tops, short shorts and mini-skirts around the ballpark. The sad reality is that there are groupies who intentionally market themselves and their bodies to athletes, often for financial reasons, and this is a constant battle players face during their many hours on the road.

Lust is one of the seven deadly sins and can bait a person into losing his marriage, reputation, and even his life if he contracts a potentially deadly disease. Men like Frazier—wealthy, handsome, in good physical condition and away from home—are constantly presented with exorbitant opportunities to sin. Comedian Chris Rock once famously suggested that a man is only as faithful as his options. If that's true, then the faithfulness of professional athletes is constantly challenged and under attack.

The seduction is real, and it finds its way to the players in many forms.

“It gets to the point where I have to unfollow this on social media, or unfollow that or decline a friend request,” Adam said. “There is a lot of temptation out there, and it’s not easy sometimes.” The Mississippi State product said he depends on a core group of men on the team who assist each other in their Christian walk.

“There are several of us who look out for each other,” he added. “If they notice something might go wrong, they speak up and keep us in line. We all do that for each other.”

Frazier also noted he sees the importance of daily Bible devotions and prayer to help him through each day.

“I’m not perfect by any means, but I know my weaknesses,” he said. “That’s why I spend time reading the Bible every day at some point and pray.”

Desires of the flesh exist, and athletes are especially vulnerable to succumb to attacks from the forces of the evil. To be successful, Covenant Eyes suggests a player—or any person—must run in three areas: 1) Run away from temptation; 2) Run to the Lord in times of weakness; 3) Run with a crowd who will keep you in line.

The best thing I learned from Adam Frazier: I appreciated Adam’s openness and willingness to tell me about his struggles. He did not sugar coat anything. Sometimes, when I speak with athletes about spiritual issues, they will give an umbrella answer with generic examples of what bothers them.

And he said unto me; My grace is sufficient for thee: for my strength is made perfect in weakness. Most gladly therefore will I rather glory in my infirmities, that the power of Christ may rest upon me(2 Corinthians 12:9).

Adam addresses his weakness, and that in turn, will help him become stronger. He knows he needs to stay in the word of God in order to fight the temptations of the devil.

There is a trap set, but Adam knows he can step up to the plate and swing away as long as Christ is his clean-up hitter.