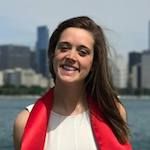 It was my sophomore year of college, and I was sitting with my cross-country team joking about one of our teammate’s diets and about how her consumption of another brownie was going to make a difference in her workout the next day.

We would laugh, calling the ones who didn’t eat sweets “good,” and subconsciously calling those teammates who did eat sweets “bad.” Little did I know how influential this conversation about ascribing morality to food, and many more conversations like it, would become in my life.

In addition, I was exposed to Instagram influencers, elite runners’ workouts on social media, and constant comments from both our men’s and women’s teams about other athletes’ fitness and bodies. It should come as no surprise that I bought into the lie that I needed to be as lean and “fit” as possible, and that this was the way to achieve success and affirmation from others.

Although I never experienced a full-on eating disorder, looking back, it was very evident in my early years of college that I had a disordered view of eating and my body.

By my senior year, I began to realize that my struggle with my outward appearance had gradually lessened and was no longer an all-consuming battle for my thoughts, as opposed to my first couple years of college. I no longer resented how I looked. I wasn’t constantly thinking about what others thought about my body. I had developed truths and beliefs I knew were true of me. It wasn’t a crazy, overnight turnaround, but I had freedom from what I thought I should look like. How did this happen? And why did I ever have that inner battle in the first place?

For the past two years I have been meeting with and mentoring female athletes (from all different backgrounds, schools, sports, and division levels) and one thing has become clear—there is an attack on athletes’ minds, bodies, and spirits revolving around body image.

You might be thinking, “Well, duh. I already knew that. That’s why everyone loves Lizzo’s body-positive message,” and you’re not wrong — but my challenge for you is to think more deeply.

If you parent, coach, work with, or are simply a friend of an athlete, we have entered a time when it’s not enough to just know this reality exists; it’s imperative to be aware of where it is happening around you.

As Kamila Tan, an eating disorder survivor, mental health advocate, and former UCLA sand volleyball player puts it, “Awareness hurts, but it saved my life. Awareness is far more difficult than being ambivalent or ignorant, but it is absolutely necessary for recovery.”

Athletes face specific sociocultural pressures that are closely related to their performance and body shape. An athlete’s recovery from an eating disorder is greatly influenced by the interactions with teammates, loved ones, and coaches in his or her life. Whatever your connection or expertise on this topic is, here are some opportunities to grow:

Speak life, not death.
In college, my teammates talked non-stop about their weight, size, strength, and speed with one another. Most of the time this was not intentionally condemning; it usually came in the form of a joke or a genuine critique to help a teammate improve. At the collegiate level, comments about someone’s looks and performance are constant.

I view myself differently today only because of God’s transforming power in my life.

At the time, I don’t think I realized how vital it was for me to be in a separate community where I was reminded of 1 Timothy 4:8: “For physical training is of some value, but godliness has value for all things, holding promise for both the present life and the life to come."

The comments I faced at practice every day, whether joking or genuine, could have set my life spiraling in a completely different direction. Without the reminder that there was more to life than just my sport, I can’t imagine the damage those comments could have made.

If you are an athlete, coach, trainer, or friend, I encourage you to become aware of when comments are only being made about outward appearance or performance, and begin a habit of complimenting or encouraging athletes on their inward qualities.

Also, become aware of the comments you make about yourself. If you only critique your own fitness or comment on how you look, why wouldn’t the athlete you care about do the same?

Help athletes experience grace, not behavior modification.
Student-athletes don’t struggle with food because they need more information about healthy eating or are uninformed about exercise. While education about health is important and obviously should happen, destructive behavior or inward body shaming goes much deeper.

Many struggle — myself included — because they believe they need the comfort of food or approval of others in times of stress, sadness, or anxiety. We must be able to identify this and help uproot these beliefs by acknowledging them and replanting the uprooted lies with biblical truth.

As Amie Patrick puts it, “Responsible stewardship of our physical bodies is clearly biblical, but trying to achieve this goal by focusing solely on changing outward habits doesn’t work for those living from a belief system that opposes the transforming truth of Scripture. The greatest need of a person caught in a trap is rescue, not a strategy for trap-management.”

Remind athletes to find community through vulnerability, not isolation through false bravado.
In her blog post “Written for Every Athlete with an Eating Disorder” Kamila shares,

“If you’re struggling with your thoughts about your body, you are worthy of help and support. Collegiate and professional athletics is a pressure-cooker. We all go through difficult and uncertain times. If you are dealing with stress, anxiety, or depression through disordered eating habits, it’s 100% okay to ask for help. I promise that you’re not alone, and that so many others struggle with the same things. If you’re struggling with restriction, binging, or purging…you’re not broken, you deserve freedom from your eating disorder, and it does not define who you are.”

Read Kamila's story
Written for Every Athlete with an Eating Disorder
from kamilatan.com

For me and many others, freedom doesn’t happen because we have extraordinary willpower or because we finally got our bodies to look exactly like we wanted them to. I view myself differently today only because of God’s transforming power in my life. Still, it took a long time for me to see the connection between the gospel and my struggles in this area. Now, however, I see that the truth of who God says I am was foundational to my transformation and resulting freedom.

Practice cultural awareness.
In Paul’s role as an apostle to the Gentiles, he provides a vivid example of cross-cultural awareness. He recognizes the difference between the theological and cultural requirements of engaging with those around him. His wisdom is expressed in these words:

We need to use cultural awareness every day. If we think that everyone else is exactly like us and treat them accordingly, we are cheapening God’s heart and pursuit of all people. We need to be in the business of conforming people to Christ, not to ourselves! If we don’t struggle with body image, that doesn’t give us an excuse not to engage or grow in cultural awareness of how to help those who do.

As the number of student-athletes with eating disorders increases, the need for the best treatment mentally, physically and spiritually should continue to be a priority to the coaches, teammates, and families of those who are suffering.

Though I didn’t know it, during my early years of college, I functionally believed that in addition to being loved and accepted in Christ, I had to still try to look a certain way in order to experience joy or peace. In Scripture, it is clear that both food and our bodies are gifts, but it’s impossible to view them this way when we turn them into idols we constantly measure ourselves against.

I know women who have struggled, prayed, immersed themselves in the Bible, repented, and tried all kinds of practical strategies with varying success to experience freedom from an eating disorder. Do not be naive — journeying through this with someone, or battling through it yourself will not be easy. For me, it took understanding my pride in acting as though Christ’s work wasn’t really sufficient — that I had to add something of my own in order for it to be enough.

When I began vulnerably talking with other women about how I viewed myself, resting in the reality that I truly had nothing to earn and nothing to prove, the lies I was believing lost their power, and my sport became a gift for which I was truly thankful.

Men and women, if you have put your faith in Jesus, when it comes to body image and disordered eating, the greatest opportunity we have is using our cultural awareness to walk with our student-athletes, teammates, and loved ones toward the freeing power and correct view of themselves, only found in the gospel.

Show me how
Lauren Sharp is on staff with Athletes in Action in Chicago. She ran cross country and track at DePaul University and claims to have the Guinness World Record for most parking tickets and/or towings in Chicago. Follow her on Twitter @lauren_sharpp.
See more from this author >>