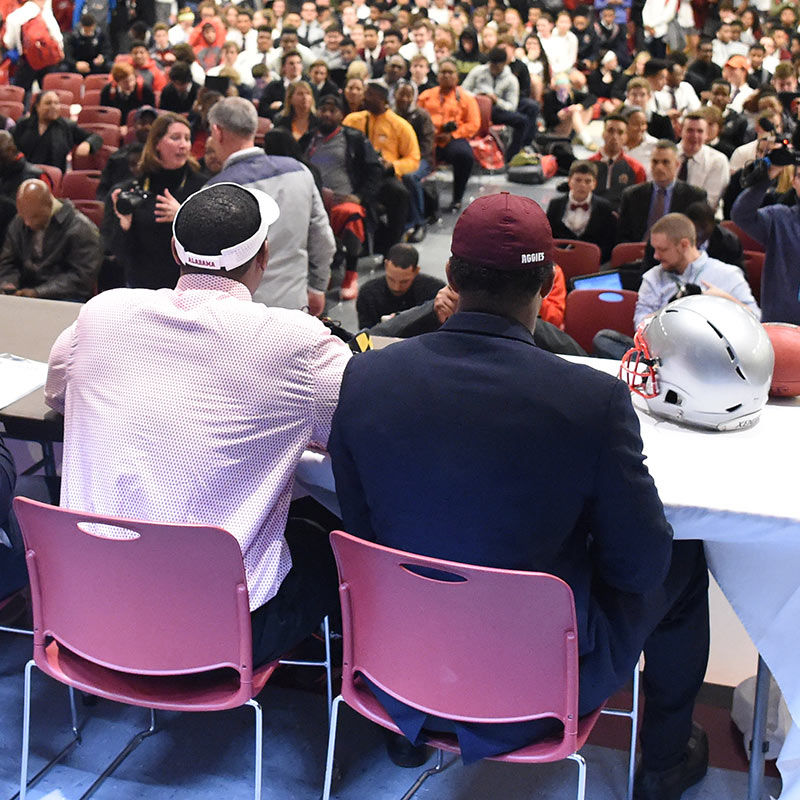 Why We Should Hit Pause on National Signing Day

At the risk of going all Ebenezer Scrooge on what’s become a college football national holiday, I’m just going to say it: watching footage of a kid signing his letter of intent leaves me feeling a bit queasy.

I know I’m not supposed to feel this way, since national signing day (caps removed on purpose) gets promoted and celebrated by the major sport networks and their social media attachments as practically meriting a day off. But if it were ever granted, perhaps it would be a day better spent mourning.

We should mourn because since he was 16 or 17 years old, the athlete being coddled on camera found his identity marked by a spurious star rating system, walking his high school halls while absorbing into his system that he is a two or three or five or no star human being.

While difficult to conclude the worse path—carrying the baggage of being under or over rated—this much is certain: the social construction of a player’s identity in that system creates a phony label weighted with expectations.

We should mourn because he wakes every day and finds people from all over the country offering opinions about his potential worth to a program, people who have zero real concern for anything that really matters concerning his future success in life—yet he begins living to please these same people with all his might.

We should mourn because the televised hat choosing spectacle we as adults both encourage and profit from not only shines a focused light on the competitive insanity of the entire recruiting process, but also provides props for what too often becomes a showboating circus.

Yes, as coaches, parents, friends, and fans of the program we can be proud that a particularly gifted athlete comes from our school or town. Celebrating the achievement of being affirmed as a Division I athlete is deserving of appropriate expressions of gratitude and thanksgiving, and may even merit a ceremony to mark the transition from high school to college.

But encouraging the athlete to tease and taunt the schools he’s not going to pick while increasing anticipation regarding his decision only enhances the entitlement culture that’s undermining his ability to have perspective in the first place. Turning the announcement into a bloated media event is unnecessary and far more about the adults surrounding the young man than about his best interests.

(Ironically, some of the coaches whose families are vocationally represented by the hats not chosen will potentially have their own lives negatively redirected because their hat was left sitting on the table.)

We should mourn because most high school athletes recruited by major programs are a solid decade away from understanding the exploitative nature of this day and the process that leads up to it. By that time, many of them will have folded under the high-pressure reality of living college life as a teen idol.

We should mourn because we know from decades of history that few will actually live up to the enormous expectations following them since junior high, while many will fall prey to a dump truck of unchecked personal issues, academic struggles, social pressures, and their own inability to discipline and push themselves once competitive life becomes more demanding.

We should mourn because we know that humans—particularly 20-year-old, testosterone filled humans—do not usually handle the weight of celebrity well. For fans, following a specific class of recruits is, as one blogger put it, like watching baby turtles marching to the sea on a nature show—you know all of them won’t make it to the end, but you hope enough do to keep the species (or program) alive.

We all get it, but there’s something almost creepy about watching to see who makes it when the travelers are really just kids.

We should mourn because we don’t have a star system that rates inner character and its potential to grow within the athlete in question, a significant void since ultimately inner character will play a huge role in how successful a player really becomes both inside and outside the locker room.

Should we challenge ourselves to consider the bizarre nature of voyeuristically tracking the decision making process of a teenager?

These are not Madden avatars, but kids whose choice to arrive on one campus or another will actually set the trajectory for the rest of their lives, far beyond whatever forgettable statistics they ring up for our school of choice. That really is more important, even if almost nobody cares about that reality right now.

Getting perspective by restraining our inner fan-desires long enough to soberly consider these concerns?

That may be harder than living up to a five-star rating.