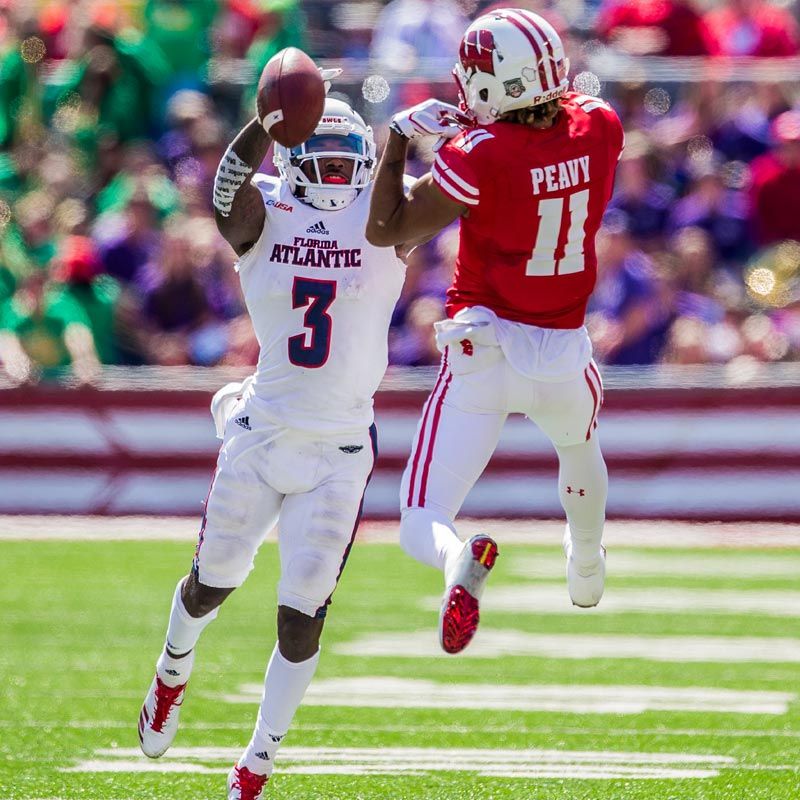 Why FAU and Wisconsin Met Twice on Saturday

I had every intention of watching Oklahoma and Ohio State battle it out on Saturday night like the rest of the country.

But with the eyes of the country fixed on the matchup of two top 5 teams clashing, two other teams were meeting together that I found more captivating: Wisconsin and Florida Atlantic University.

Yep. But they met again later that night in Madison at the visiting team’s hotel.

Though every other football team from the state of Florida had its game canceled, Florida Atlantic still made the trip up to Madison late Friday night. As if playing the game while their home state was soon to be devastated by one of the strongest hurricanes in a century wasn’t bad enough, they were forced to wait on the runway for another two hours before getting cleared to leave and head to their hotel.

The next morning Lane Kiffin’s squad played their hearts out, only to come up short of upsetting the #9 ranked Wisconsin Badgers at Camp Randall. Most visiting teams would then head back to the hotel, shower up, and make their way to the airport to catch a flight home.

FAU didn’t have that luxury. Their flight was not just delayed, it was cancelled—and the eventual return flight home was “to be determined at a later date.”

The University of Wisconsin covered their hotel expenses and food as they waited in Madison.

Now that Irma has passed, we have to thank @BadgerFootball for their hospitality. Your department and fans are some of the best. Thank You. pic.twitter.com/CSXaaa19ZM

But the body of Christ also stepped in to help.

The scene that unfolded on Saturday night consisted of football players from FAU and WI, as well as a pastor from Blackhawk Church (a local church), and staff members from the ministries of Athletes in Action and Fellowship of Christian Athletes. The purpose was simple: to show love and support to FAU by praying with them for their families and friends back home.

There were no pictures taken. No tweets sent out. No news stories published. And yet, that night three partnerships took place that are worthy of celebration.

The post-game prayer that routinely takes place at the 50-yard line is an amazing thing. In no way do I want to downplay the significance or beauty of that event, but it offers a measure of convenience. It’s close. It’s traditional. It requires little time and effort.

But what happened on Saturday night—as the two teams met for a second time—took post-game prayer to another level.

On Saturday night there was travel involved. There was great sacrifice of time. Those who showed up chose not to watch the “big game.” It meant breaking routine to do something other-centered and sacrifice the laziness of a Saturday night.

Now, we would never admit that ministries like Athletes in Action and Fellowship of Christian Athletes are “opposing ministries.” But I kind of just did.

Reasons exist why these two ministries are not merged into one. Although we believe in and share the same gospel message, there are strategies unique to each ministry that are believed to be best.

On Saturday night these two ministries laid aside strategic differences and came together—as they have done multiple times around the country—to show love and support for the FAU football team.

Church and Parachurch Coming Together

I agree. As a campus minister, I believe that God’s primary plan for reaching the world is—and always will be—through the local church. My job in parachurch ministry is to help drive people within the ministry to the church. What happened last weekend was a beautiful picture of what can happen when churches and parachurch ministries link arms and move together towards the people they both seek to serve.