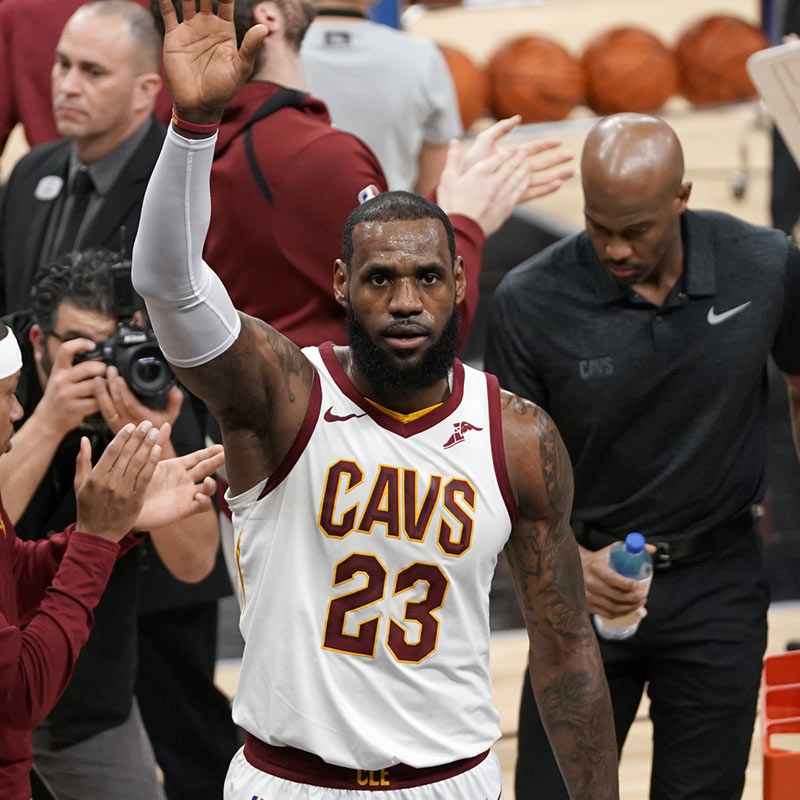 What King James Can Learn From King Herod

Hours before his Cleveland Cavaliers were scheduled to play in San Antonio against the Spurs, Lebron James—or can we hope someone on his behalf??—posted to Instagram in anticipation of him scoring the seven points needed to reach 30,000 for his career.

In somewhat bizarre fashion, Current Lebron affirms Young Lebron for what he anticipates Old Lebron is about to do.

Wanna be one of the first to Congratulate you on this accomplishment/achievement tonight that you’ll reach! Only a handful has reach/seen it too and while I know it’s never been a goal of yours from the beginning try(please try) to take a moment for yourself on how you’ve done it! The House you’re about to be apart of has only 6 seats in it(as of now) but 1 more will be added and you should be very proud and honored to be invited inside. There’s so many people to thank who has help this even become possible(so thank them all) and when u finally get your moment(alone) to yourself smile, look up to the higher skies and say THANK YOU! So with that said, Congrats again Young King 🤴🏾! 1 Love! #striveforgreatness🚀 #thekidfromakron👑

So Postmodern in its self-referential, time-warping perspective.

Proverbs 21:1 “Every way of a man is right in his own eyes, but the LORD weighs the heart.”

So Millennial in its self-congratulatory back patting.

So prophetic in assuming that any number of tragic occurrences would NOT take place before arriving at the arena let alone during the game before he could put seven points on the board (see: Gordon Hayward).

Read More
7 Ways to Pray for Gordon Hayward
from athletesinaction.org

Proverbs 27:1,2 “Do not boast about tomorrow, for you do not know what a day may bring.”

So “Nones” in its worshipful but abstract and meaningless shout-out to the “higher skies”—which could have at least been capitalized to suggest a power greater than oneself.

I Chronicles 16:25 “For great is the LORD, and greatly to be praised; He also is to be feared above all gods.”

Nothing new here. Cue this as background noise in today’s sport culture, exactly what we’ve come to expect from a generation of athletes largely given over to entitlement, idolatry, and narcissism.

Certainly, gestures like this one only strengthen the argument for using these unflattering words, and James is simply a poster-child for their manifestation, the real-life embodiment of a generational ethos now pervading every level of sports culture.

While the post is fodder for comedic turns of various sorts, as of this writing it has also acquired the attention of 1.4 million viewers, a mass of folks coming for all different reasons, many of whom will find nothing wrong with his post at all. That’s a problem—perhaps more disturbing than the post itself.

I’m from Cleveland. I love watching Lebron play basketball in my home region. The fan in me appreciates his journey to 30,000 points and can knowingly chuckle at his celebration of anticipating himself doing it.

But I’m also a minister of the gospel of Jesus Christ, constantly alarmed at the various forms of idolatrous behavior that continue to dominate sports today.

Join me in making this imaginary introduction between two self- and publicly proclaimed kings: “King James—and the 1.4 million who liked his thanking-me-for-being-the-best-me-possible post—I’d like you to meet King Herod, and consider heeding the outcome of his life.”

Now Herod was angry with the people of Tyre and Sidon, and they came to him with one accord, and having persuaded Blastus the king’s house manager, they asked for peace, because their country depended on the king’s country for food. On an appointed day Herod put on his royal robes, took his seat upon the throne, and delivered a speech to them. And the people were shouting, ‘The voice of a god, and not of a man!’ Immediately an angel of the Lord struck him down, because he did not give God the glory, and he was eaten by worms and breathed his last. But the word of God increased and multiplied.

After Acts 12, what words would Current Herod use to exhort Young Herod about the fate of Old Herod in a modern day Instagram post?

We can guess that he wouldn’t be the centerpiece of its praise, nor would he be giving obligatory nods toward the “higher skies.” If he could, he might argue it’s best to remove self-praise from one’s lexicon altogether, and, recalling his final memory on earth, he would certainly shudder at the thought of others directing their praise toward him.

The Giver of all good gifts will not be mocked forever. It’s best to remember this on occasion so we’re not surprised when the Herodian-sized perspective adjustment suddenly arrives to remove us from the center of our own lives. Better still, remember it so we can repent in advance and make the adjustment on our own, letting the Word work on our heart so the worms don’t have to.