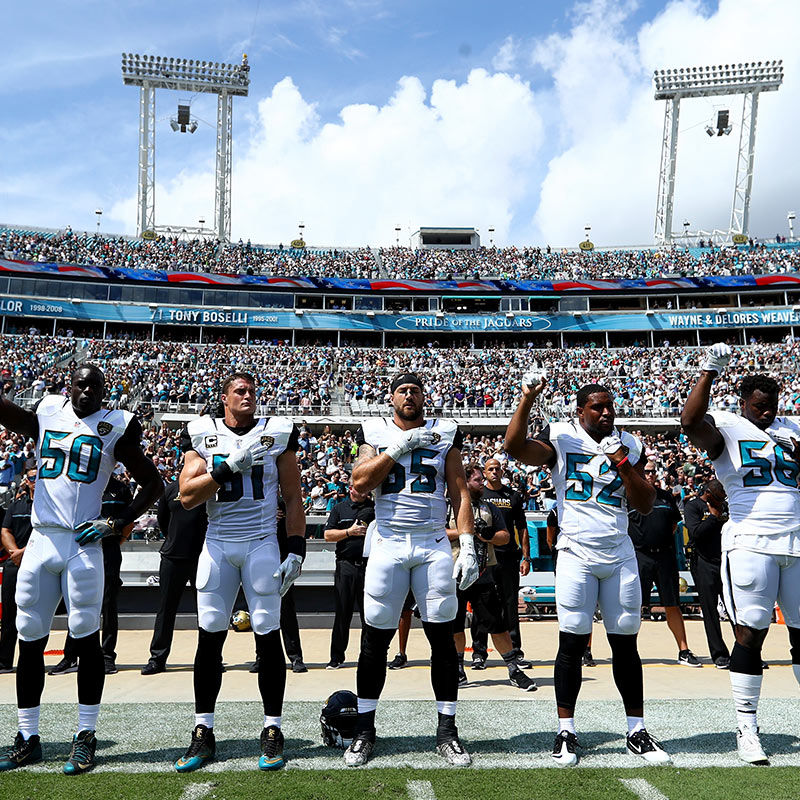 25 Questions After a Wild Week in Sports

#1 Did y’all watch Week 3 of the NFL season Sunday?

#2 Were protests from the more than 200 football players who took a knee, locked arms, raised their fists, and remained seated during the national anthem more about bringing awareness to racial injustice and systemic oppression or mainly in response to the leader of the free world challenging the authority of NFL owners?

#3 Will Sunday’s displays of unity ultimately help people understand the initial reasons why athletes decided to protest in the first place?

#4 Is it just me or were demonstrations by America’s Team the most perplexing of all?

#5 The Washington Post’s Wesley Lowery pondered a good question after watching the beginning of the game:

if kneeling before the anthem also gets you boo'ed, doesn't that suggest that opposition to kneeling was never about the anthem?

#6 What are the chances people looked up the verse (Proverbs 31:8-9) written on Jordin Sparks’ hand?

#7 Will this moment in sports history propel Christians athletes and others alike to have healthier prayer lives?

#8 Given the show of solidarity from the league, does this mean Colin Kaepernick has a better chance of being on any team’s roster?

#9 And doesn’t Kaepernick’s absence from this week’s Sports Illustrated cover speak volumes about how the message of the protests he activated is getting lost in the shuffle?

THIS WEEK'S COVER: In a nation divided, the sports world is coming together https://t.co/sKPjrhHhmZ pic.twitter.com/3yzkvV1OCl

#10 What can we learn from the WNBA when it comes to protests?

#11 Are things even more complicated now with Alejandro Villanueva and the Pittsburgh Steelers?

#12 If we think athletes of color can’t relate to people who experience injustice and are absolved from being mistreated because of their multimillion-dollar salaries, couldn't we ask Seattle Seahawks’ Michael Bennett, former tennis player James Blake, or Utah Jazz forward Thabo Sefolosha if their tax bracket or if the zeros on their paychecks have changed how they’re perceived on the street?

#13 What moved Bruce Maxwell to kneel?

#14 Similar to Maxwell, will we see any NASCAR drivers decide to blaze a trail?

#15 What’s a protest if it doesn't make people uncomfortable?

#16 Does history tell us that significant change comes if you ask politely and protest the “right way” or that there’s no real risk involved?

#17 Who really thinks that we would’ve voluntarily made strides to become a more equitable union if there was no Montgomery Bus Boycott, no March on Washington, no sit-ins at Woolworth counters, no trek across the Edmund Pettus Bridge resulting in Bloody Sunday, no Brown v. Board of Education mandating schools to treat all children equally, or no Voting Rights Act of 1965, etc.?

#18 Will we see any demonstrations at the 2018 Winter Olympics in PyeongChang, South Korea?

#20 Will LeBron James be remembered for his activism off the court along with his greatness on the court or will his legacy be sanitized like Muhammad Ali’s?

#21 Will folks outraged by peaceful protests take advice from FS1’s Nick Wright and dive beneath the surface to ask themselves what they’re actually mad at?

The protests have been hijacked by folks with an agenda. I tried to set the record straight this morning. I think this is worth your time. pic.twitter.com/p5xmmjeeYY

#22 Will the full humanity of athletes of color ever be appreciated or will their bodies only be commodified and consumed for entertainment?