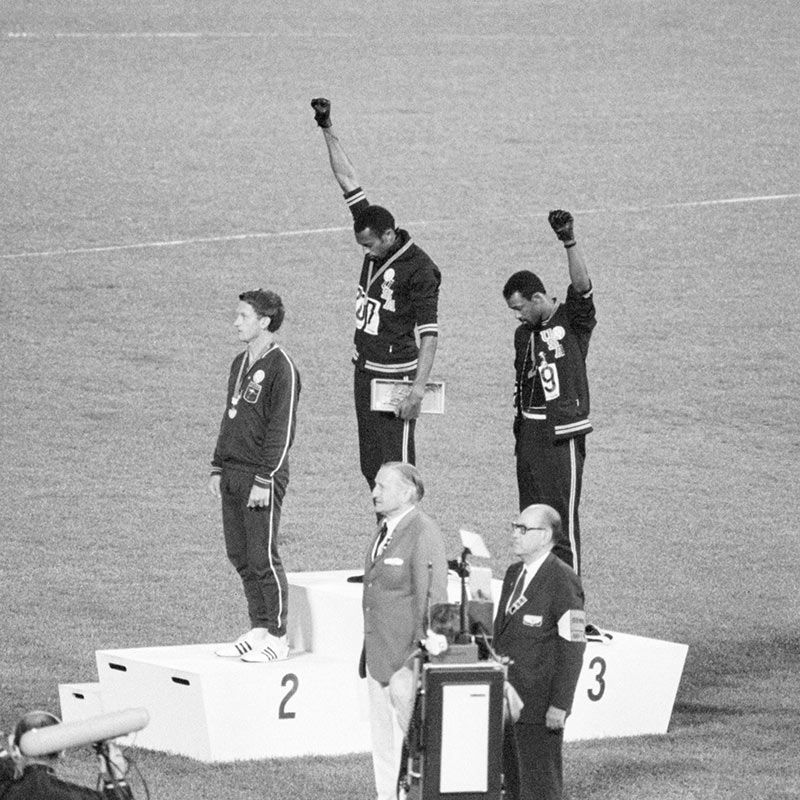 Every now and then I like to geek out on historical documentaries. I wouldn’t call myself bonafide history nerd, but my guilty pleasure often involves watching anything on the History Channel or anything involving the '60s since I think it’s such a pivotal decade.

This week I found myself watching 1968, a documentary about the Olympic Games in Mexico City. The film added fresh context to the overall competition that year and to the iconic moment that would rock the world and be etched into American history.

In order to bring attention to injustice in the U.S., Olympic sprinters Tommie Smith and John Carlos staged a protest as the U.S. national anthem played. With their black-gloved fists pointing toward the sky, their message was sent loud and clear.

Read More
What You Might Be Missing in the Kneeling Debate
from athletesinaction.org

Obviously, a similar method of protest has been executed recently around the NFL and nearly all major sports leagues in similar pursuits of justice. So I jotted down some notes on how black athletes engage issues of social justice and how it’s changed — and stayed the same — in the last 50 years.

#1 Black athletes inhabit two worlds: the world of athletics and the world as they’ve grown to know and experience it. That was true in 1968 and still is today. The noticeable difference is that current athletes feel empowered to share their stories as those worlds continue to collide.

#2 Fifty years after Smith and Carlos raised their clenched fists with Australian sprinter Peter Norman silently joining their cause, we’re still crying out for justice, pleading for progress, and demanding change. It’s a reminder that as more things change, the more they stay the same. I wish I could sound more optimistic. That doesn’t minimize the remarkable progress the country has made to end racism, discrimination, and inequality, but it is evidence that institutional and systemic sin still prevails in our broken society. Which means we’ve still got work to do before Jesus comes back.

#3 The film also chronicled the stories of some black athletes who elected not to protest in the same way Smith and Carlos decided to and those who wanted no part of their activism. It’s a reminder that black athletes shouldn’t be obligated to be thought leaders on social justice or any topic.

As Brando Simeo Starkey of The Undefeated says, “Black athletes can utter whatever they wish and we should wrestle with their positions as warranted. They should not, however, feel compelled to speak because we petitioned them to do so.”

#4 Even if black athletes don’t choose to use their platform to touch on weighty issues, my hope is that they would commit to being athletes who can bring their whole selves to any arena and gain a nuanced understanding of the things that matter to them and give themselves the permission to share those things with the public when they so choose.

#5 Those who refuse to “shut up and dribble” or stick to sports help raise the level of consciousness around issues that touch us all. For example, Serena Williams brought awareness to the disproportionate risk black mothers face in the process of childbirth when she spoke about her postpartum complications and Brandon Marshall’s work to remove the stigma of mental illness gives people a new perspective on mental health. I’m grateful that athletes leverage the influence they possess to speak on matter of importance that range from environmental justice to prison reform.

#6 For many black athletes, their relationship with Christ informs their commentary and their action around the issues they give voice to. That James 2:17 type of faith is exhibited by athletes at all levels from Eric Reid and Malcolm Jenkins to Maya Moore and Steph Curry as well as many more who aren’t seen on the front of the sports page. Their embodied faith is just as important as their profession of faith.

#7 Black athletes come from a range of experiences and are more than their athletic ability. They are community organizers, entrepreneurs, farmers, leaders, mathematicians, ministers, teachers with passions and convictions galore. They are informed citizens, too.

#8 Black athletes should continue to let their voices be heard. The world needs to hear them. May we be quick to listen.