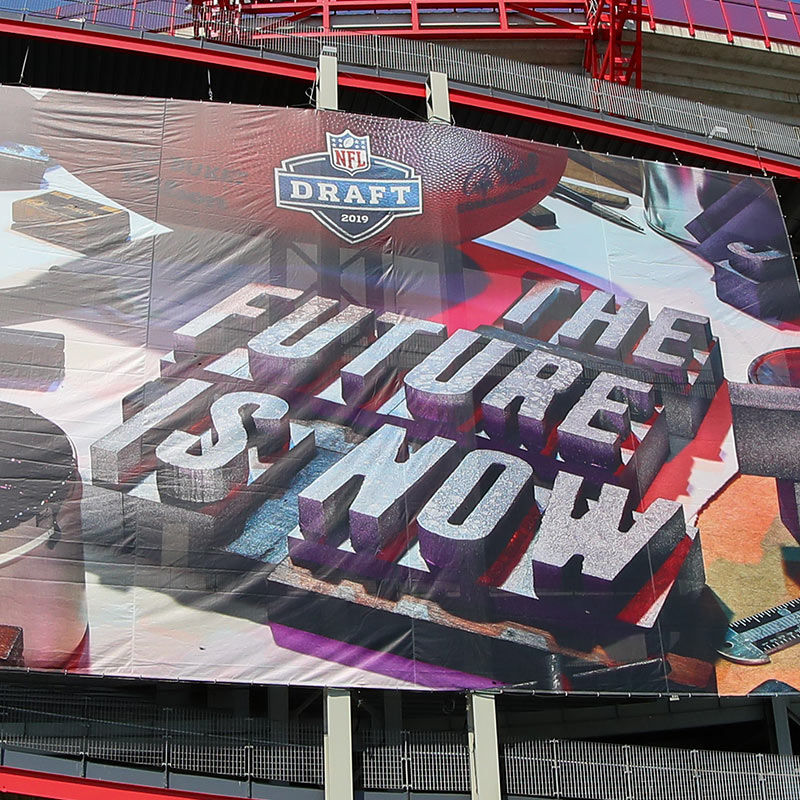 As spring emerges from winter, there are many sights and sounds we have become accustomed to. Chirping birds take to the air in search of debris to build nests for eggs that will be laid, lawns turn green once again, and that familiar hum of the neighbor’s lawn mower fills the air.

Everything seems so poetic and fresh. While the earth wakes from its winter slumber outside, inside news feeds from ESPN and Bleacher Report are filled with exciting sporting events that happen every spring: March Madness, the start of the MLB season and the Masters. However, for a week in April, the NFL takes over our feeds one more time with the NFL draft.

Over the years, the draft has grown from a weekend event to a traveling spectacle. It is approaching the influence of the Super Bowl in terms of importance in the crowded field of NFL news. Undoubtedly over the past few weeks you’ve heard sports journalists and TV personalities spend countless hours debating, predicting and arguing what each of the NFL’s 32 teams needs to do in order to hold the Lombardi Trophy in a few years.

Inside the 32 NFL team headquarters, general managers, scouts, coaches and front office personnel are busy evaluating their current rosters and rating their individual needs at every position. Each team’s scouts have been scouring the country, attending every pro day they can, sometimes hitting 3-4 college teams a day to uncover hidden talent. This is in addition to the extensive evaluation that takes place at the annual NFL combine, where the best college athletes are invited and assessed for potential longevity and impact within the NFL.

However, there is something critical that is lost within all this evaluation and drama. For every exciting twist and turn the NFL combine, evaluation process and draft bring, there are lives impacted by the choices of 32 teams. What we see in the public are the chosen few who are selected. But what about those who aren’t?

Every year there is a pool of 3,500 eligible players who are finished with their college careers or are underclassmen who have declared for the draft. Out of these 3,500 hopefuls, only 254 will hear their names called on draft weekend, and a handful of others will sign free agent contracts. These athletes have dreamed of taking their athletic talents into the NFL. For many of them, this is all they have worked for, and they aren’t sure what they will do if their dreams aren’t accomplished.

It’s not only the lives of the undrafted that are impacted. What about the aging (in the NFL, 28 is considered aging) veteran players? They watch their teams and local media pundits gush over the hot new draft picks who will inevitably come in and take their jobs and potential livelihoods.

What about their significant others or spouses who must pick up and leave the homes they’ve had for the last three years to embark on the daunting journey of developing community in a new city with new faces. What about the kids, or even the coaches whose livelihoods are essentially placed upon the shoulders of 22- to 24-year-old athletes?

The physically and emotionally demanding life of a professional athlete can feel overwhelming when he looks down the barrel of his career and realizes that it might be over. Considering the ramifications of the NFL draft for a large number of people is illuminating. Ultimately, the NFL draft has the potential to teach each athlete, family member and fan an important eternal truth: trust in the Lord.

What does our Christian faith say to the athlete who doesn’t get drafted or chosen to continue his career professionally? And what would Jesus say to a “veteran” under the age of 30 who must now think about his next step in life? The answer is found exactly where each one of God’s children finds answers in times of uncertainty: the Scriptures.

There are many Scriptures we can lean on in times of uncertainty and insecurity.

When you watch the draft this year, ask God to give you new eyes and a new Spirit to see the humanity and the lives that are impacted by the decisions of 32 organizations. Allow the NFL draft to expose things within your own heart, and consider the Scriptures above as you learn what it means for you to personally trust God in uncertain times.