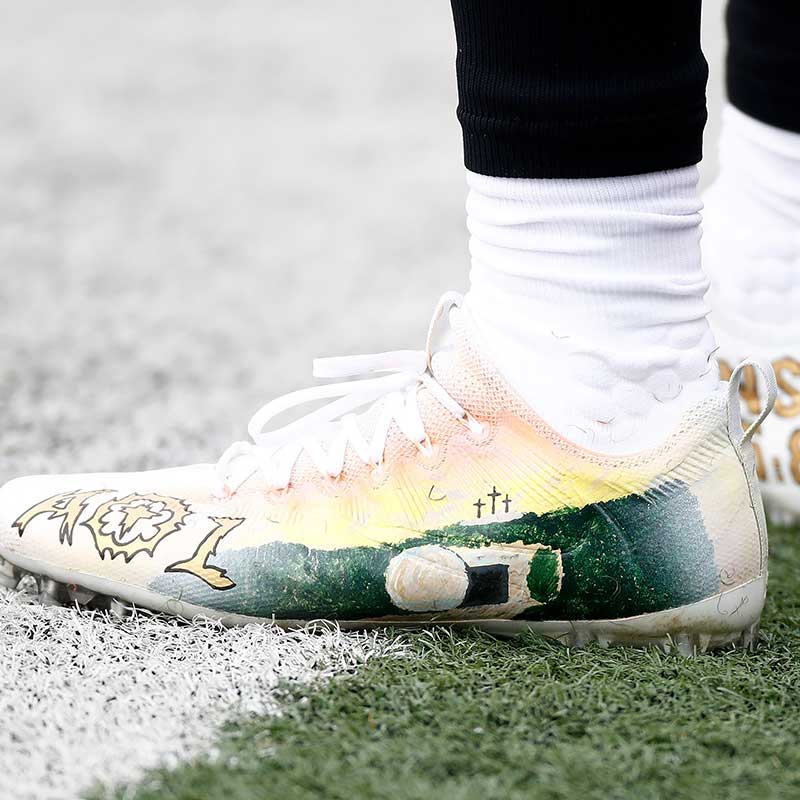 Representing one of the coolest NFL promotions in recent memory, Week 13 players were allowed to wear cleats supporting the non-profit of their choice. While breaking their own stringent uniform policy, league leadership both opened the door and encouraged individual players to make a statement through their customized footwear.

The effort raised awareness about a host of great causes and movements nationwide, and put NFL footwear center-stage in a rare break from the monotony usually expected regarding players’ onfield attire.

Several Philadelphia Eagles decided to use this opportunity expose the world to their “Audience of One,” explaining the gospel in the process.

It's not just a slogan. It's a lifestyle. Thanks Chris Maragos Carson Wentz and the rest of the Philadelphia Eagles for this reminder!

Posted by Athletes in Action on Sunday, December 4, 2016

Their cleats made for a beautiful in-game Jesus tract, loaded with the gospel message applied to sport.

On one side of the shoe, they chose Romans 5:8 as a summary of the gospel, a verse which says “But God demonstrates his own love for us in this: while we were still sinners, Christ died for us.”

On the other, a mural painting of an open tomb with the three crosses of Golgotha hovering over an empty hillside grave, a resurrection scene loaded with significance.

They went a step further, however, when on the same side of the shoe they scripted the logo “AO1,” a symbol perfectly describing the surrendered Christian athlete’s worldview—both on and off the field.

The collage of 10 athletes patched a two-minute chapel message together in collectively saying:

“This is the One that we play for. It’s not about making our name famous, it’s about making His name known to all mankind in everything that we do...When the lights go on and all eyes are fixed on us, our eyes are fixed on Him—Jesus, the creator of the universe. It’s not just a slogan, it’s a lifestyle. Living for Him, playing for Him, and giving Him all the glory—win, lose, or draw. I play for an Audience of One. What about you?”

From the cross to the open tomb, God’s love is demonstrated through the death and resurrection of Christ. When God’s love penetrates the heart of individuals—in this case, athletes—it necessarily translates to the field, as players show their worship of God by acknowledging Him as the only audience that really matters, regardless of performance or outcome or other audience opinions.

As AIA staff writer Brian Smith said in a recent essay regarding Christian athletes’ use of social media,

“For the Christian athlete, promoting yourself should always be a secondary concern. Don’t be fooled by the hype: Whatever platform you currently have to influence others is a stewardship granted to you by God. He wants you to learn to use it for His purposes and not merely for your own...Whatever ‘brand identity' you are going for, if you identify as a follower of Christ, making Him known better play a big part in that.”

With this opportunity, a handful of Philadelphia Eagles went out of their way to focus people’s attention on Christ and lived out Smith’s admonition perfectly for an afternoon. Well done, men!