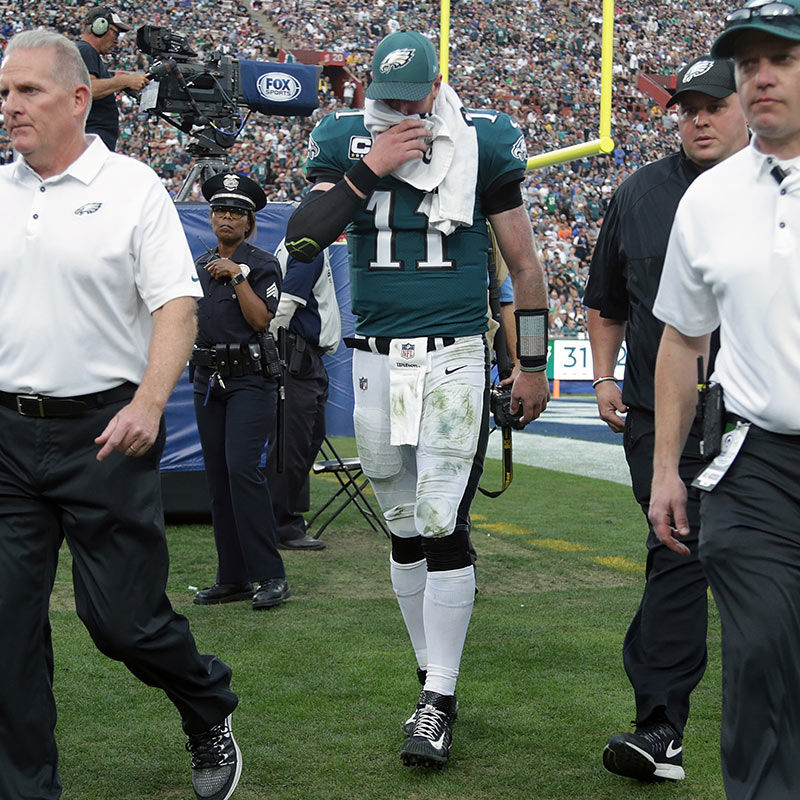 Eagles fans around the country let out a collective groan on Sunday Night as their star quarterback, Carson Wentz, hobbled off the field with a knee injury. After an MRI on Monday, the bad news of an ACL tear confirmed most people’s fears.

His season is over.

Wentz, an outspoken Christian, took to social media late Monday afternoon to address the fans. A few hours after posting to facebook, his message had 1.6 million views.

The amount of affirmation he is receiving from the video only confirms what ESPN analyst Sean McDonough said about him a few weeks ago: “He’s a tremendous young man. [He] says his faith is the most important thing in his life and he is one of those people who lives it. When you are around him you can feel the inherent goodness that he has coming from his faith.”

A few hours removed from the video being posted, three observations jump out. Two of which are centered around Carson—the last one for the rest of us.

I love that Wentz did not shy away from saying he is struggling. He starts off by saying, “Obviously it’s been a rough day for me personally. I am not going to lie. I have a ton of faith in the Lord and in His plan but at the end of the day it’s still been a tough one. And it will be tough for a little bit.”

He follows that statement by offering some perspective. He shares about how he knows Jesus has a plan. According to Wentz, Jesus is going to use this trial to grow him, teach him, or use him somehow.

This is incredible perspective from a man who just found out he will spend about nine months in rehab before seeing the field again. And yet, his perspective is so refreshing because it comes on the tail end of him being honest and vulnerable. The order there is so important, especially when he is trying to use his platform—and this circumstance—to show the world the love of Christ.

Well done, Carson. Thanks for showing us your humanness first and then offering the godly perspective.

Wentz was not looking to throw a pity party on social media. After starting with authenticity and perspective, he quickly redirected attention off himself and onto his teammates who just won the division title. He reminded his fans that the team accomplished the first part of their goal and expressed faith in the quarterback who will lead the team from here. With the world watching, he chose to point watching eyes and listening ears back at his team.

What About the Rest of Us?

I’ll be honest, when I watched the video, my first temptation was to think: “This dude is the real deal. He is genuine. He has perspective. He really seems to trust Jesus!”

And there is nothing wrong on the surface with any of that. Social media seemed to affirm some of those same thoughts running around in my head as people all over the world are retweeting, sharing, and commenting on the growing legend of this man. I won’t assume to know what others are thinking at this point, but here is where I find my mind drifting towards:

This is not Wentz’s problem. He is doing his job of being a light to the world. This is my problem—and maybe some of you too—that we become so impressed with him we forget who has transformed his heart to act this way.

Jesus gives some great instructions in Matthew 5:16: “In the same way, let your light shine before others, that they may see your good deeds and glorify your Father in heaven.”

Wentz is playing his part. But am I? Are we?

Are we seeing his great deeds and glorifying God—or are we glorifying Wentz? The line can be so gray.

As Christ followers, let’s celebrate and affirm what Wentz has done and hopefully will continue to do in the years to come as he brings glory to God through whatever circumstance the Lord throws his way.

But let’s make sure our celebration and affirmation pinnacle in glorifying the God who makes all this possible.