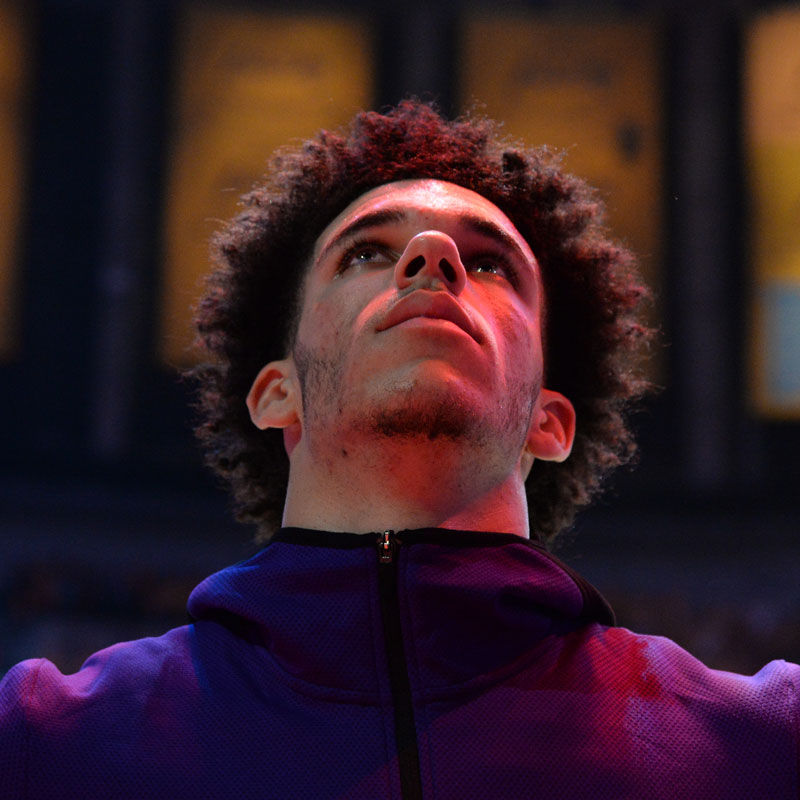 How to Exasperate Your Son While Building a Brand

Anyone who understands competitive athletes saw it coming.

After harassing him the entire game, Beverley said, “I told him after the game that due to all the riff-raff that his dad brings that he’s gonna get a lot of people coming at him. He has to be ready for that.”

That, at any rate, was what he shared with reporters. Others in attendance recalled plenty of expletive-filled, insulting barbs spewed for extra effect.

For those who don’t follow college and professional basketball, Lonzo Ball’s father, Lavar, has been agitating both current and former players with his grandiose and audacious statements regarding his son’s—and his own—ability and place in the pantheon of players.

Much of this talk seems to be shrewd native advertising for Ball’s “Big Baller Brand,” a product line featuring $60 t-shirts and $1000 shoes.

But all of it comes at the expense of his sons Lonzo, LiAngelo, and LaMelo. Indeed, since last year, Ball has been writing checks his sons will henceforth be expected to cash.

As the second pick in the 2017 NBA draft just now playing his first full season against grown, pride-filled men competing in the best basketball league in the world, Lonzo Ball may learn that his account is already overdrawn—entirely a result of his own dad’s year-long and very public withdrawals.

After an amped Beverley attacked Ball before, during, and after the game, Charles Barkley said on TNT’s Inside the NBA,

“The thing that really sucks for this kid—I think he’s going to be a good player, I think he’s a nice kid too. But all that stuff with his daddy, them boys are gonna be gunning for him. He’s going at Steph [Curry], Michael Jordan, going at guys, and now when these guys see him...guys take that personally...Like, these guys, they’ve been sitting around reading all these articles listening to everything his daddy said, and them boys gonna be going for his head.”

In June 2017, Lonzo Ball wrote a beautiful Father’s Day piece on The Players Tribune honoring his father for the example he set, the love he gave, and the guidance he provided while growing up. He did this after making a Foot Locker commercial with other NBA Draft hopefuls that deliberately pokes fun at the outlandish behavior his dad displays.

But how long will it be—if it hasn’t already privately happened—before he realizes that his basketball career is being made incredibly more difficult by his dad’s behavior? How long before he grapples with what the Bible calls being provoked to both anger and discouragement by his father’s verbal antics?

Placing unrealistic expectations upon him. Causing others to feel negative emotions toward him. Making his work life unnecessarily difficult every night. Forcing him to answer for comments he didn’t make. The pressure to live up to a heroic ideal he didn’t request. Using him to build a family brand. Placing a target on his son’s back with folks lining up to take a shot.

The passages don’t say, “Don’t provoke your children, unless it helps with brand awareness and financial equity.” Rather, the passages suggest that under any circumstances provocation will eventually lead to anger and discouragement, and for any normal human son, the above ingredients mixed together almost have to produce exasperation at some point.

“Let me go off for a second on Lavar Ball, and all the networks including this one [ESPN], who put a microphone in front of him for minutes at a time—that’s editorial malpractice. That shouldn’t happen. Ok? Cuz’ we don’t need to know what Lavar Ball says anymore...What responsible father puts a target on his child? I find what Lavar Ball does now loathsome at times. He’s not the only father who’s raised good kids or talented kids, and to see this, particularly for me, a father, for a Black father, to do this, to put his child in professional harm’s way. This incredible target, that now people in the league hate your kid because you behave like a self-absorbed jerk. And networks like ours help him. I find it all loathsome. It’s worse than reality TV.”

True enough that the Senior Ball would have little platform if not for the network’s TMZ-desire to constantly broadcast dumpster fires alongside his willingness to light them. But let us also note our own complicity in the exasperation of the Brothers Ball every time we hang around long enough to read or listen to more comments from their father. Some entertainment should make us queasy, and given the effect Lavar Ball’s comments will have on Lonzo Ball’s life during his rookie season, this particular drama may qualify as one we should stop endorsing.

ESPN’s Tony Kornheiser offers the insight that “When he [Beverley] uses the word ‘the riff-raff’ that Lavar Ball brings, this puts a target on Lavar Ball’s chest not of his own making. His father created this...he’s going to get pushed around. This reminds me of Bryce Harper in his first at-bat as a rookie against Cole Hamels, and Cole Hamels hits him, as if to say, ‘You’re a punk—welcome to the league,” and this is going to happen to Lonzo Ball, and that is NOT fair.”

It’s not fair. It’s a dad building a brand on his way toward exasperating his son. For those of us prone to watch, let’s turn away from the fire while there’s still time.