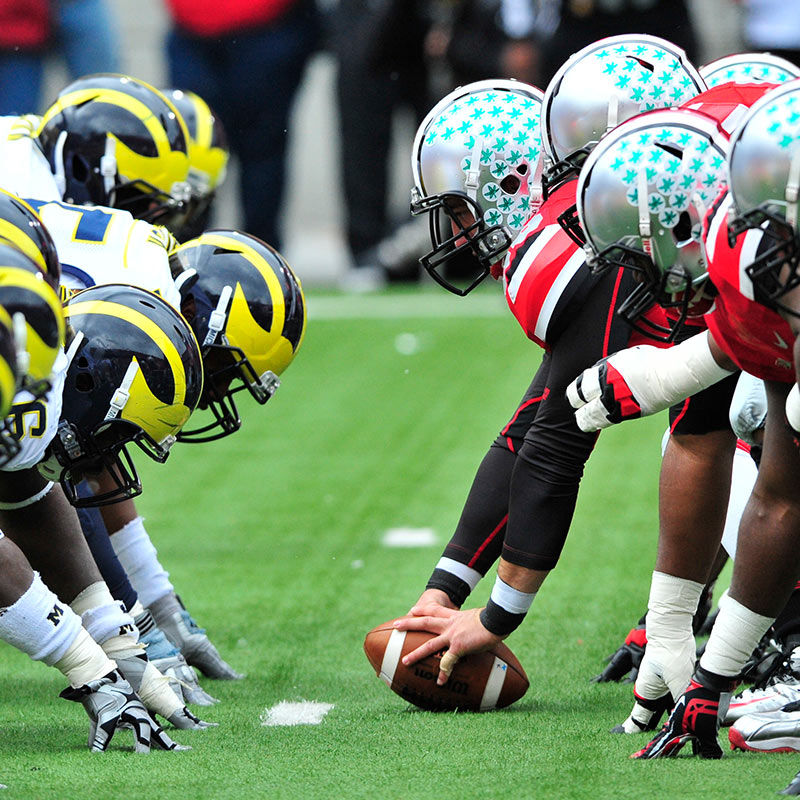 How Rivalries Bring Out The Best in Us

This is the second of four essays on Rivalry Week by former University of North Carolina wrestler, AIA staff person, and now pastor, Reid Monaghan. In each of these reflections, Monaghan wants us to consider the place of rivalries in our lives, examining them for both their positive and negative effects on our soul.

Bring your A-Game: The Strengthening of Competition

A few weeks ago I was speaking at a marriage conference and in the room were both hardcore Michigan and Ohio State football fans. Both teams had recently suffered losses and one of the guys in a sort of happy, even relieved, tone said, “This year the rivalry will be pure. There will likely be no titles or playoffs on the line. Just free, hyper competitive football.” For me his comment went right to the heart of the benefits of sport and the helpfulness of others pushing us to be our best.

One of the classic Hebrew proverbs tells us this: Iron sharpens iron, and one man sharpens another (Proverbs 27:17). There is a sharpening, there is growth, there is a process where we can actually make each other better. Growth as human beings requires challenge, stretching, and refinement that only happens when there's competition. Rivals—if approached in a spirit of humility and mutual respect—can make us better. It requires a different motivation that is a bit higher than merely dominating an opponent. For the Christian, it means practicing our craft before an Audience of One, rather than trying to defeat the other man.

The apostle Paul wrote that Whatever you do, work at it with all your heart, as for the Lord and not for men, knowing that from the Lord you will receive the inheritance as your reward. You are serving the Lord Christ (Colossians 3:23-24).

Whatever we do, we do it as if serving God and not simply people. When we compete as an athlete we offer our best before God as worship and the glory belongs to Him. Think about two athletes, one from Michigan the other from Ohio State, both playing in this way. Game on. High level. Rivalry without hatred or guile. You better bring your A-game. Both are going to be bettered by the battle. In the end, both can walk away with wins.

Even the most bitter of gridiron enemies can be partners in honoring God on the field together. Rivalries can bring out the best in us. In the wins, in the losses, and in the thrills and agonies of the big games, God is at work and can use it all to bring glory to His name.

The historian Doris Kearns Goodwin captured this in her book about Abraham Lincoln’s Presidency. She wrote about Lincoln and the leaders that served with him on his cabinet. The book’s title? Team of Rivals. There was something about these men that made them better when they challenged one another and when they served the greater cause of the country together.

How much more for the Christian athlete, or fan, who plays along side others and against others for a victory that goes beyond the competition? She plays for the glory of God and the good of others in the game. This allows God to shine a different light on our games and allows us to sharpen one another along the way.