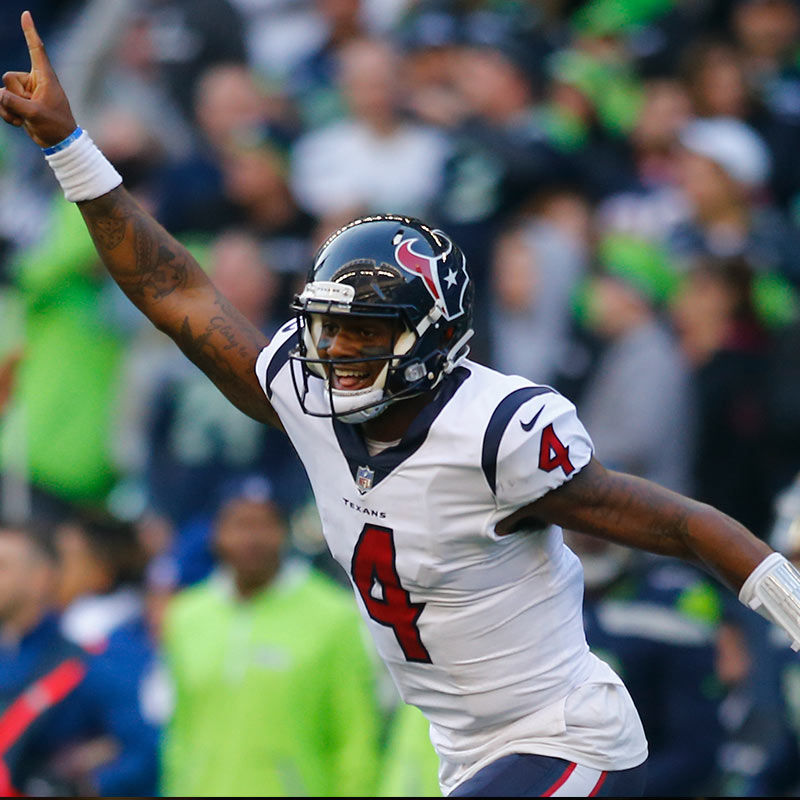 How Could This Happen to Deshaun Watson?

The city of Houston went from celebrating a world series to losing their emerging star quarterback in less than 24 hours. ESPN reported on Thursday afternoon that Deshaun Watson tore his ACL in practice, effectively ending what was quickly becoming one of the best rookie campaigns in NFL history.

While the Texans are left to decide what to do at the quarterback position for the rest of the season, some Christian fans might be scrambling to answer the question: How can a man who recently voiced his desire to glorify God have this happen?

Hours before another phenomenal performance—this time against one of the best defenses in the league in the Seattle Seahawks—Watson tweeted out: “For HIS glory!”

How frustrating must it be for Watson, four days later, to see his season come to an end? The joy I felt when I saw that “glory” statement met its match in heartbreak for him after I heard the news of his ACL tear.

Christian fans would do well to pray for Watson. After Gordon Hayward’s recent injury, I tried to encourage his fan base with 7 really practical ways to pray for an athlete who has just suffered an injury. I will say again what I mentioned in that piece. These athletes need our prayers much more than they need our good vibes.

Some of us need to do more than pray for Watson, however. A few may need to wrestle with a theology of how God could allow an athlete desiring to bring Him glory to get injured.

Here is a snap shot of a few replies that represent a large cohort of responses to Watson’s tweet on October 29.

Remember that and u will continue to soar DW💯💯

And that youngin is why you are going far. #keepGodfirst

Walking in HIS will leads you to a blessed life. ❤️#DW4ever

Tweets like these can be read in a number of ways, but one of those ways greatly concerns me. In keeping with an often held perversion regarding God's glory and our wellbeing, it goes like this: “Keep giving glory to God and He will keep blessing you with success.”

The subtle lie that we can believe, as God fearing fans, is that God rewards those who play for “His glory” with athletic success. He very well may. But it is dangerous to assume He’s bound to bless because of an outward expression of an athlete’s intent. Even more dangerous to pigeon hole an almighty God, assuming He can only receive glory through prosperity.

This is by no means an indictment against Watson, who for all purposes seems to live out a radical and generous faith. Rather, it is a plea for Christians every where to proceed with caution when we link God’s blessing and glory with earthly success.

Desiring to glorify God through sport does not always mean the athlete will come out on top of the scoreboard. Unfortunately, our sports stars cannot make a deal with God with contractual obligations that read “If I play for your glory, you (God) will make sure I win the game or give me personal success.” Again, I am not saying Watson did that. But I believe some of us think that is how God operates. The replies to Watson’s tweet indicate it may be more than “some.”

At the end of the day, the danger of this thinking is that it limits God. It shows a funnelled view of a God who can only receive glory through success and not failure—or injury. One needs to merely open their Bible and read the stories of biblical heroes like Joseph (betrayed by his brothers), Moses (never entered the Promised Land), Jeremiah (depressed and felt betrayed by God), John the Baptist (death by decapitation) and Paul (beaten, stoned, shipwrecked, and bitten by a snake) to see how God often uses pain and suffering to bring glory to His name.

Why God chooses to operate that way is mysterious. It can also be frustrating. But it is in that moment of frustration, when nothing is going right, that I believe a Christ-follower can glorify God with a heart posture that says “this is awful, but I love you God, and I trust you.”

Ultimately, we need to look no further than the cross of Jesus Christ, where the burden of humankind’s cumulative sin was placed upon a perfect Savior. Can God be glorified through a hardship? Absolutely. Perhaps even more so! He did it 2000 years ago with the crucifixion of His Son and He still does it today.

Let’s join together and pray that our brother in Christ can continue to glorify God through the circumstance the Lord has for him. While we're at it, let's reconsider our own understanding of God's glory and its relationship to human suffering and hardship.