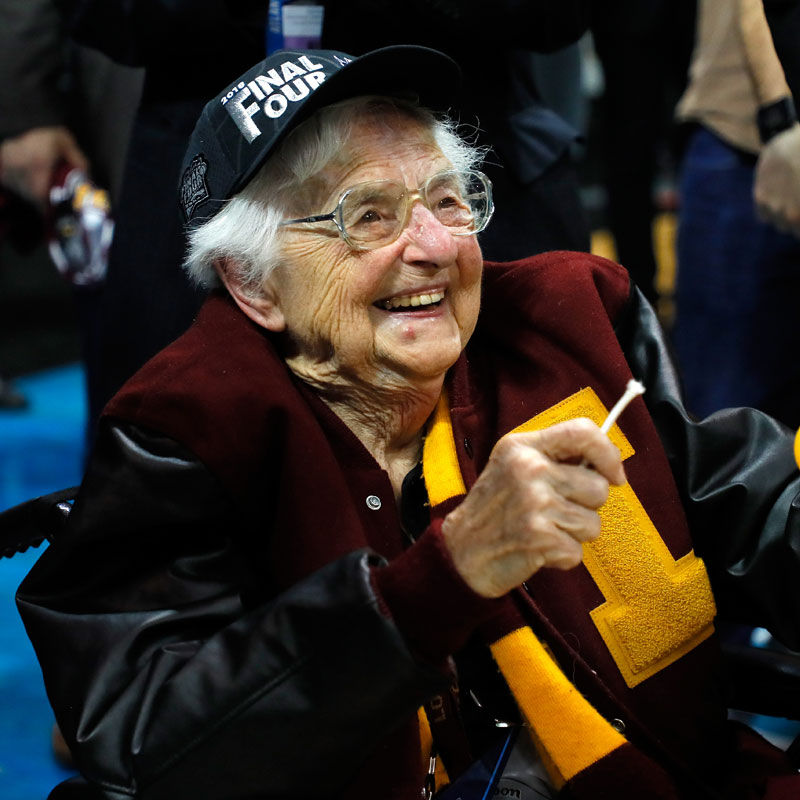 Every Team Needs a Sister Jean

This year’s March Madness has been marked by historic upsets, jaw-dropping buzzer beaters, and one team’s Cinderella run to the Final Four—and a 98-year-old nun’s role in it.

Sister Jean Dolores-Schmidt, longtime chaplain for the Loyola-Chicago men’s basketball team and international media magnet, found herself thrust into the spotlight during the tournament as her 11-seeded Ramblers find themselves two wins away from a possible national title.

A team without a household name wasn’t supposed to contend this deep into the NCAA Tournament or beat the odds so convincingly, but the Ramblers had an undeniable recipe for success: team chemistry, grit, game strategy buy-in, faith, and a pregame prayer lead by Sister Jean.

“I always start with good and gracious God, we need your help. And sometimes we need it more than ever, and that what's happening to us in the NCAA,” she told NPR. “We call upon you, God, to be there with us. We'll do our part. We'll run up and down the court to get our baskets. We'll keep away from fouls, and we'll try to make our shots. I also will pray that the referees make their calls fairly for each side.”

See: How to Pray Before, During and After Competition

Sister Jean is a darling with a wealth of knowledge about the game, is full of as much team spirit as Loyola fans have in the student section, and can dole out the zingers in any interview.

Sister Jean with a backwards hat on is a national treasure. pic.twitter.com/bV4U7gWjcO

But her true star power comes from her role as a faithful intercessor. To hear head coach Porter Moser tell it, she’s as vital to the team as anyone on the floor. Her involvement with the team and presence in the stands is a reminder that having someone in your corner encouraging, caring, and praying for you can make a difference.

What Sister Jean provides is more than a team morale boost. She’s equipped with relaying the message to players that they are loved and accepted by God no matter the result of any outcome on the court.

“Whether we win or lose, God is still with us,” she told The New York Times.

Who knows what effect a nun’s time in the limelight will have on spectators’ views of sport chaplaincy or if it will influence how they view God, or if it will reinforce the myth of God as a spiritual good luck charm that favors one team over another.

The hope is that she helps drive home the impact unconditional support has on players. Athletes, like all people, would like to be assured that they are worthy of love because of who they are, not because of what they do or how well they do it.

You don’t have to be a sports chaplain to provide that.

As Christ followers we are all ministers who can impact those around us through prayer. Here’s how you can pray throughout the tournament:

Although we may not have as much personality or style as the famed chaplain, we can all be someone’s Sister Jean.