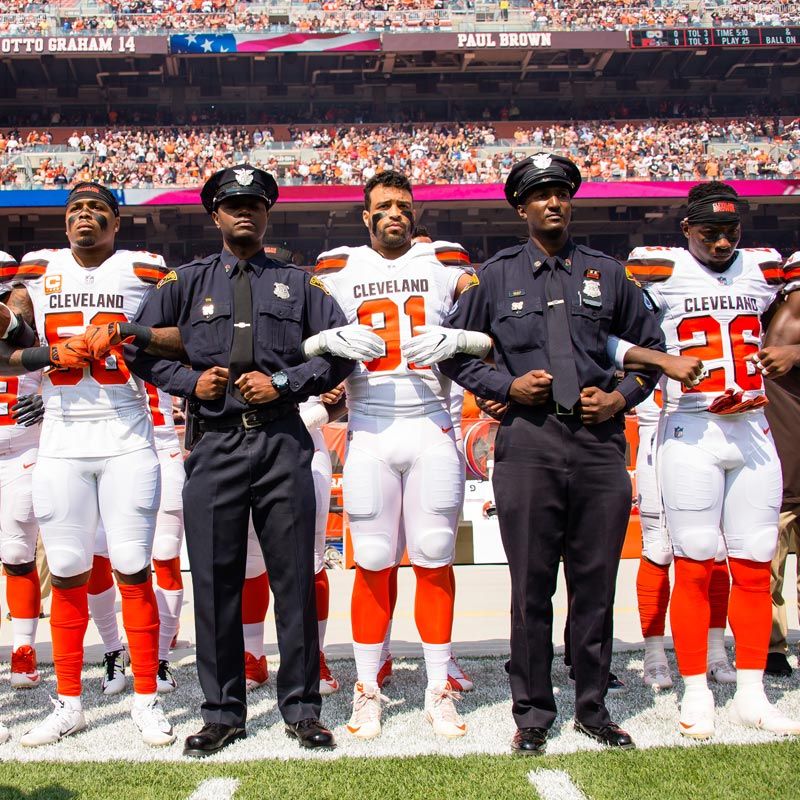 Did Cleveland Just Provide a Template for Change?

Before their opening game with the Pittsburgh Steelers, Cleveland Browns players ran out of the tunnel with police, firefighters, and EMTs, who also stood with military, team owners, and executives arm-in-arm during the national anthem.

A week ago, nobody would have seen this coming.

The players’ decision to form a prayer circle during the anthem before a Monday night preseason game created several weeks of turmoil in Cleveland, including police union president Steve Loomis counter-protesting by saying law enforcement would not participate in the anthem ceremony for the Browns before their first game.

In the midst of this local dustup, Browns linebacker Christian Kirksey, who led the pregame prayer that started the tension in Cleveland, took six teammates to meet with owners Jimmy and Dee Haslam along with several other members of the Browns front office to explain why they knelt in prayer and locked arms before their preseason games.

That hour-long conversation produced the show of unity demonstrated before the game, and created an environment for future conversation and action. Players have talked about going on ride alongs with police, hosting town hall communications with police to discuss community relations, and devising plans to help communities become stronger within themselves.

Police Chief Calvin Williams affirmed the conversation between the players and administration and the actions taken by all involved.

“It means that people are willing to sit down and work together to come up with actual solutions rather than just talking about what’s wrong and who’s at fault. That’s what the Browns have come to the table and said: ‘We want to be able to talk to folks and start a dialogue.’ Which is kind of what—if you want to call it a protest or what their prayer was about—to start a dialogue, to start to talk about some of these issues and try to come up with solutions.”

Browns co-owner Dee Haslam added, “Until we start talking about race and equality and building up neighborhoods and working together, we’re not going to be able to solve the problem. They [the players] want to go out and talk about it, and they want to do it with the police force.”

After the results of the meeting became known, even Loomis released a new statement, saying, “We have accepted their invitation and the Chief’s office is detailing 20 members to participate in this event [the home opener]. Once again Cleveland has risen above the fray and demonstrated that respectful communication is the key to solving any problem. We can always accomplish much more good by standing, communicating, and working together than we ever will by standing apart.”

It seems obvious enough but is still worth asking: Shouldn’t Christian athletes, executives, and civic servants—of which there were many involved in these discussions and actions—strive to be agents of civic healing? Shouldn’t Christians be involved in helping people move beyond the pride-filled, anger-producing arguments around the issue and move toward solving the issues themselves?

So much of the rhetoric surrounding these moments of athlete/anthem protest devolves into arguments regarding the offensive nature of the act, the meaning of the flag, the complicity of team and civic leaders during the pre-game ceremony itself, the appropriate times to pray before, during, and after games, how and where protest can be legitimized, and any number of other interesting but secondary issues.

These debates and discussions distract from the main questions that are the point of the offensive protest action in the first place: How do we bring healing in our communities between those holding power and charged with maintaining law and order and those who often feel that same power is being misused at their expense? What can the police change in their approach to law enforcement? What responsibilities do we have as citizens to minimize threatening situations police face in our own communities?

Protest gestures are a call for change, but in themselves they change nothing—especially since more often than not, people wind up talking about the wrong things after the action in question. In fact, except for a handful of Browns players, administrators, and Cleveland servants who spoke and then acted, we might assume that nothing really changed for those who saw the locked arms unless they left with renewed commitment to live differently.

A pre-game gesture of White and Black police and players locking arms won’t stop another policeman from abusing his power against a person of color, nor will it do anything to make his job less dangerous and threatening in the city. It looks good, maybe even inspiring, but it doesn’t change current reality.

Change means raising our children in a way that teaches respect for authority and living in such a way that we cross paths with activated law enforcement as infrequently as possible.

Change means acknowledging that a problem exists and putting aside political commitments on both sides long enough to genuinely discuss it.

Change means taking the initiative—especially as White folks—to have discussions with our kids about the racial climate in our culture, tracing its history across 400 years instead of just the last few weeks of media updates or the last political cycle.

Change means acknowledging that police live stressed, dangerous lives, and working to make their lives easier as much as it depends on us within our homes and communities.

Change means laying aside our arguments and statistics and entrenched desire to make sure we stay “right” in our position, instead giving more energy to the difficult work of learning how to love people who disagree with us.

Several Browns players, Browns ownership, the Cleveland police and other civil servants present at the game should all be commended for having the courage to move beyond arguing about gestures and instead seeking solutions to the questions and problems that plague us all.

Indeed, as Christ-followers, we should continue asking God to help us change in areas we just haven’t been able to fix—and probably never will on our own.