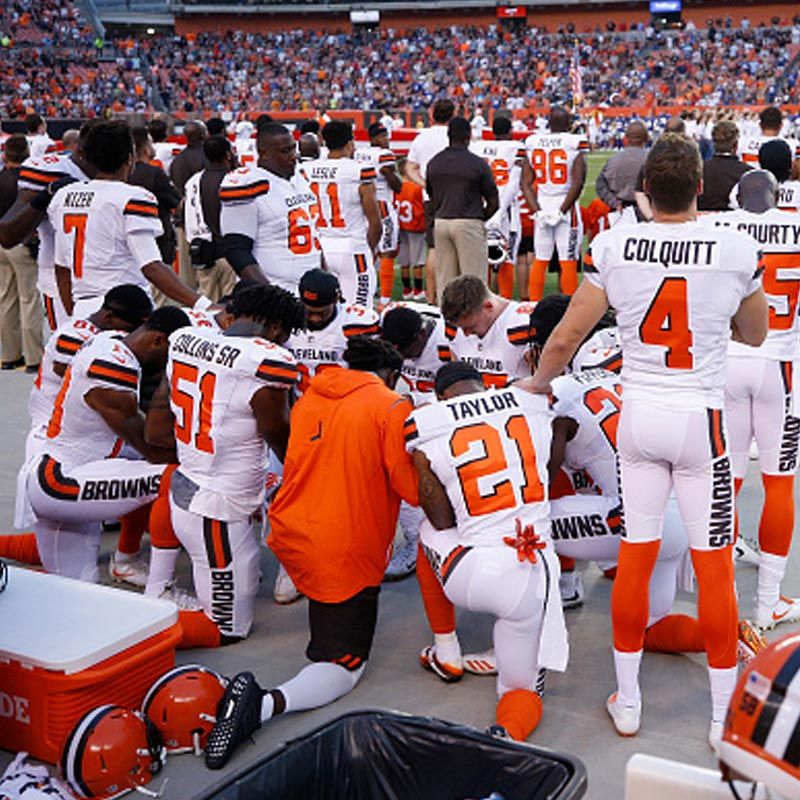 As NFL players continue to use the National Anthem as an opportunity to grab people’s attention each week, the Cleveland Browns introduced a new wrinkle into the protest format.

As the anthem began before their preseason game with the New York Giants, more than a dozen players—including Seth Devalve, the first White player to kneel with his Black teammates—gathered and prayed by the Browns bench. The majority knelt while others stood attentively with their hand on teammates shoulders in solidarity.

Linebacker Christian Kirksey led the prayer during the anthem. "If anyone was wondering what was going on in that circle,” he said, “we were saying a prayer and we were just praying over the country, praying over things that we were going on. We tried to do it as respectfully as possible and we respect everything that happened with people in the military, we respect all of that. We just felt it was the right time to do that, say a prayer, pray over this country."

Interestingly, in a survey on cleveland.com the day after the game, 65% of over 4,000 polled maintained that “They (the players) should always stand for the national anthem,” even if their reason for not doing so was to pray.

These poll results produce an interesting conflict for Christians to consider in this moment.

Most of us have probably been taught to respect the playing of the national anthem with silent and respectful attention from the time we could stand—reinforced with stern rebuke and discipline for those who failed to control either body or mouth during the ritual. This teaching explains why folks are so angry at Colin Kaepernick for his choice to kneel in protest, and equally reveals why he did it in the first place. Such a gesture is sure to get a reaction because of what we’ve been taught about its significance, whether we agree or disagree.

Reasons given for the silence were varied: respect for those who fought in wars, respect for a nation whose constitution protects our freedoms, respect for elected officials charged to govern and protect, perhaps even simply respect for the fact that “this is just what we do” without further explanation.

But is it ever more proper to step away from collectively singing a national song of honor to one another in order to turn our collective minds and spirits toward the One who alone can heal the very nation we’re singing about? Should we ever temporarily suspend respecting our national tradition to instead extend a gesture of respect toward God who allowed the nation to form in the first place?

If we say “no” to that possibility, has our love and respect for this nation become an idol in our heart that competes with our ultimate submission to Christ?

As Dr. Preston Sprinkle wrote on this site previously, “Christians too often ignore these questions or get mad when people raise them,” but they are the type of questions an engaged Christ-follower must ask in this particular moment.

But they are also warned against believing a nationally elected “King” can protect us from our enemies or ultimately heal our land in its most broken places, desiring to have a sense of “nation” to bow to like other nations (I Samuel 8). When confronted with a choice between national pride and worship, God expects His people to choose Him.

If you consider yourself a “God and country” type of Christian, what happens when the two come in conflict with one another? What happens when both say, “You must pledge allegiance to me and no other”? One says “Stand and sing my song with respect” while the other says “Kneel and pray for healing with repentance” at the very same time.

A public prayer circle forming in the midst of a “sacred” national moment forces us to think about our allegiances. When prayer takes the place of a protest gesture of refusing to stand or sing during the anthem it gets even more interesting.

"We took the opportunity to pray for our country and for the men and women in this country during that time," DeValve said after the game. Again, better to sing a collective song to ourselves on behalf of those who serve, or instead to raise a collective prayer to God who holds the fate of their very lives in His hands?

Interestingly, in our particular American moment, to kneel in prayer believing in a God who hears is even more offensive for most than simply kneeling to say “I won’t sing your song.” But should a Christ follower feel that way?

Christian, being directly confronted with a choice between the two rarely happens in as public a moment as these players created for themselves, but don’t miss the opportunity to think about it.

Your response to the moment they created reveals the true god of your heart, and that’s always worth thinking over.