A Reminder on Gratitude 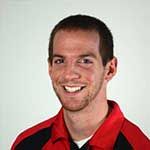 Indians left-handed pitcher Ryan Merritt was called up for a spot start before being sent immediately back down to Triple A the next day. But his call up reminded me of a big-league moment that occurred with Merritt last Fall during the playoffs.

The playoffs are always a time when the unexpected takes place.

For Game 5 of the American League Championship Series, the rookie pitcher was called upon for his second career big league start.

Blue Jays slugger Jose Bautista said that Merritt would be “shaking in his boots.” Instead, the 24-year-old stuck out three and gave up no runs in 4 ⅓ innings to help the Indians clinch a trip to the World Series for the first time since 1997.

During the game, fans discovered Merritt's wedding registry online and began making purchases as a thank-you for his performance.

So what did Ryan and his fiancee, Sarah, do in response to this gesture? They sent thank you notes to each and every fan!

What a way to cap this story: Ryan and his fiancée sent thank you notes to Tribe fans who bought gifts off the couple's registry.

How thoughtful of Ryan and Sarah to return gratitude with gratitude.

Gratitude is a simple, yet powerful thing. A verbal ‘thank you’ takes just seconds, and writing a short note only takes a few minutes. Most people don’t realize how meaningful an expression of gratitude can be for the person on the receiving end. Studies show that 80% of people (specifically employees) who know they are appreciated are motivated to work harder and stay at their jobs.

Unfortunately, the words ‘thank you’ are either easily tossed around without meaning, or simply not mentioned enough. Feelings of gratitude, when not expressed, are good for nothing.

It’s interesting that the verse Ryan and Sarah closed their thank you notes with was Philippians 4:7. “And the peace of God, which transcends all understanding, will guard your hearts and your minds in Christ Jesus.” Just three verses later, the apostle Paul closed his letter to the Philippian church by thanking them for financially providing for the needs of his ministry.

“When I set out from Macedonia, not one church shared with me in the matter of giving and receiving, except you only… you sent me aid more than once when I was in need,” Paul wrote in verse 16.

Not only did Paul express gratitude, but he noted that he cared more about the church experiencing eternal rewards than he cared about receiving their material gifts. “Not that I desire your gifts; what I desire is that more be credited to your account” (verse 17).

By sending a thank you note to each fan who bought them a wedding gift, and the sincere way in which they wrote the note, it seemed that Ryan and Sarah Merritt were more concerned about their new fans encountering God than the gifts themselves.

How’s that for a way to sincerely express gratitude?