Editor’s Note: When entering into conversations about racism, it’s important to understand that though the Bible may never mention the word “racism,” it does describe the ideas, behaviors and characteristics of racism as sin.

God created everyone carefully and intentionally in His image. That means every person has value and importance because God says so. When you criticize, judge or make assumptions about God’s handiwork, you are also criticizing and judging Him.

This topic can be painful and frustrating. Everyone has different understandings and experiences. Some have been hurt directly, some have seen this from a distance and some don’t see a problem. It is important to approach this conversation with a humble heart, knowing that no one fully knows or understands it all.

I grew up in a household that was fairly uncommon in the 1990s — with one black parent and one white parent, married and very much interested in creating a harmonious environment to raise my little brother and me.

Through their interest in “keeping the peace,” my parents managed to give me a unique experience that contrasted with our country’s history of race relations. That gift was a firsthand look at two cultures that are often considered to be in direct opposition to one another collaborating in peace and love. Growing up in such an environment granted me a small understanding of God’s intention for His people to live in unity (John 17:21).

However, as beautiful as this gift is, it came with a distorted view of the reality of current race relations in the United States. This, in turn, made it rather confusing for me as a multiethnic/bicultural person to operate in a country that is still extremely divided on race, ethnicity and culture.

For much of my life, I believed that racism was virtually nonexistent — that we can breathe easy now that slavery is abolished and there aren’t “colored” and “white” signs hanging over drinking fountains. My U.S. history teachers didn’t teach me about systematic injustice or that there are still racial tensions in the United States.

As I became more perceptive of the world around me, I learned that I needn’t look any further than my high school cafeteria to feel confronted with the truth of division based on a social construct we call “race.” The divide was evident — white kids sat with white kids, black kids sat with black kids, Asian kids sat with Asian kids and so on.

The harshest reality about this divide was that it was not created solely on preference but on mistrust, lack of comfort and refusal to empathize with cultural differences due to a long history of racial tension. The seemingly simple choice of which lunch table to sit at became incredibly complex when deciding whom I trusted and whom I was most comfortable around. Conflict arose within me when I was faced with the choice of siding with one part of my ethnic and cultural identity over the other.

BROKENNESS IN THE CHURCH

When I became a follower of Jesus, I picked up my rose-colored glasses again. I entered Christian environments thinking, “Surely Christians, who are built on the solid ground of love itself, who desire to represent Jesus to the world — surely they will be different from the divided world I’ve seen.”

I was quick to learn that Dr. Martin Luther King Jr.’s observation still proves true: “It is appalling that the most segregated hour of Christian America is eleven o’clock on Sunday morning.”

I began to ask, “Aren’t all Christians worshiping the same all-powerful, loving, sacrificial, redemptive God? How is it that division has entered this space where love and unity are always encouraged?” Finding what Christian environment I fit in became a daunting task, bringing me back to the familiar tension of choosing one side of my ethnic identity or another: Do I attend a “black” church or a “white” church?

Sharing equally in these two cultures and ethnicities created tension within me because of the division of race in our country — a division that has existed for this country’s entire history.

UNDERSTANDING RACE AND THE GOSPEL

After becoming a Christian and facing the reality of racial division in the church, I began to want answers to the questions that continually pressed on my heart: What actually is race and racism? What does the Bible have to say about racial division?

I quickly discovered that race is something that humans created to develop a social hierarchy between ethnic groups. Race is not something that is based on any sort of chemical or scientific make-up of these different groups of people. It’s primarily based on the color of one’s skin.

Webster’s Dictionary defines racism as “a belief that race is the primary determinant of human traits and capacities and that racial differences produce an inherent superiority of a particular race.”

Racism is sin. Sin can be defined as not living as God intended us to. From a practical perspective, sin can look like holding onto hatred and resentment toward others, assuming you are more valuable than someone else (pride), refusing to love, and so on. All of these are characteristics of racism.

When we hold hatred in our hearts for other ethnic groups, or when we refuse to love, or when we think of ourselves as more valuable than other people groups, we rebel against God’s best intentions for us. This divides and turns us against one another. This is what racism does.

You see, God created humanity for perfect relationship with Himself, and we (humans) messed it up. We went our own way, believing we could do just fine without God, and in doing this we invited sin into our world. Sin has turned us against one another and encouraged hate in our world.

My prayer is not for them alone. I pray also for those who will believe in Me through their message, that all of them may be one, Father, just as You are in Me and I am in You. May they also be in Us so that the world may believe that You have sent Me. I have given them the glory that You gave Me, that they may be one as We are one — I in them and You in Me — so that they may be brought to complete unity. Then the world will know that You sent Me and have loved them even as you have loved Me.

JESUS’ PRAYER FOR US

Yet we are not without hope. God did something about our sin. He sent Jesus to this earth to die for our sins and to reconcile us to God and to each other.

Jesus paid the ultimate price so that we could be brought back into relationship with Him AND with each other — so that we could live in unity with those who are different from us. In fact, before Jesus was taken to the cross, He prayed for us in the garden of Gethsemane:

“My prayer is not for them alone. I pray also for those who will believe in Me through their message, that all of them may be one, Father, just as You are in Me and I am in You. May they also be in Us so that the world may believe that You have sent Me. I have given them the glory that You gave Me, that they may be one as We are one — I in them and You in Me — so that they may be brought to complete unity. Then the world will know that You sent Me and have loved them even as you have loved Me.”

THE SEARCH FOR UNITY

This prayer reflects Jesus’ desire that His followers (the church) would be known by their unity so that the world would come to know Him and believe in Him and that He would be glorified. This means our unity gives our witness credibility.

With this in mind, it’s important to recognize that we are unable to foster unity through our own effort. It is the Holy Spirit working in the hearts of those who follow Jesus that enables us to be willing participants in the journey toward unity. Without the influence of God’s Spirit in us, we labor toward unity in vain. We must come to the humble realization that no one but Jesus is capable of uniting the un-unitable and loving those unlike Himself.

Our unity as followers of Jesus points to the redemptive work of Jesus on the cross and helps people see that the gospel does what no person or thing can do: bring together the most unlikely of foes.

This doesn’t mean that we all have to be the same. Unity does not equal uniformity. God has purposely made us different from one another in ethnicity, culture, gifts and abilities. Our differences should be celebrated as unique reflections of God!

As followers of Jesus, if we are to move forward in the fight against racism in the United States, we must ask God to show us areas for growth in our own view of ethnicity, culture and race. When you can acknowledge your own bias, He can begin to reshape your sinful perspectives and attitudes.

The gospel is your hope for personal and national change. Without it, you cannot draw from God’s humility for self-awareness and grace to extend to others as we move toward one another. When you rely on God for grace and humility in conversation and action, you will begin to see a change in perspective. You will begin to see God’s kingdom through a more accurate lens. Only then can you learn what it truly means to “be one” as Jesus and the Father are one. 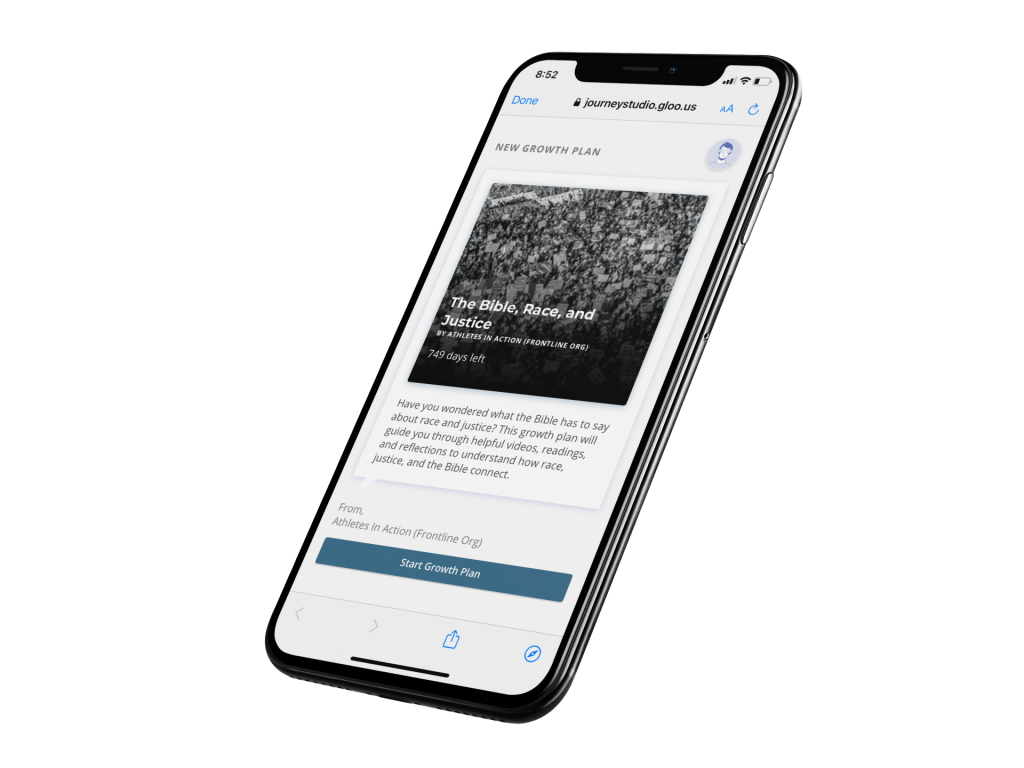 Put the principles you just read about into practice and integrate it into your life. Athletes in Action© has put together a growth plan of resources, practical steps, and reflection guides to help you see how the Bible, race, and justice connect.

*To track your progress, you be asked to create a secure and private account on our hosting platform that is powered by Gloo.

Racism: What Thoughts or Feelings Come to Mind?