Editor’s Note: Many people feel shame about their own prejudices or the racism of their ancestors. They may even feel ashamed of their own race or culture. This attitude is not biblical. Ethnicity and culture should be things we value and appreciate as ways God intentionally and uniquely designed people. Not only is ethnicity a good part of God’s creation, but Revelation 7:9 shows us that different ethnicities and cultures will be a part of our eternal lives as well.

Wherever you are in the process of understanding racism, take comfort in the fact that because of Jesus’ forgiveness, you do not need to feel any shame (Romans 8:1). Racism is a sin, but instead of getting stuck in shame or guilt, you can repent and receive God’s forgiveness through Jesus (1 John 1:9). This allows you to embrace the ethnicity and culture God gave you and appreciate the value and beauty of the ethnicities and cultures of others. Only when you repent and let go of shame can you enter into conversations about race and culture with humility and openness.

Discussing race in America can be uncomfortable. But, as is the case with many important issues, becoming uncomfortable is the only way to make positive change. Only when people leave the comfort of ignorance and choose to enter into the messiness can we work together to bring about positive change.

An important first step is to acknowledge both personal and historical wrongs. It is tempting to try to distance yourself from historical wrongs. However, even if you don’t have ancestors who owned slaves, discrimination against people of color has been the written and unwritten basis for many laws and systems in our country. This results in what is called systemic racism. It means our society is based on a system that is more favorable to the majority culture and benefits white people in general.

When acknowledging wrongs, be careful not to get bogged down in shame. Instead, repent. Repentance is not just feeling sorry or admitting wrongdoing. It goes a step further with a commitment to positive personal change.

RACISM IS A SIN

The truth is racism is a sin. Racism hurts people, and God hates it because God created different races and ethnicities to be a beautiful reflection of His complexity.

As with any sin, God offers forgiveness for racism through Jesus. When you receive that forgiveness, you no longer need to feel shame for your sins. Romans 8:1 says, “Now there is no condemnation for those who belong to Christ Jesus” (New Living Translation). “No condemnation” means that you are freed from the consequences of shame and guilt when you accept Jesus’ sacrifice on your behalf.

Unfortunately, like with many other sins, instead of repenting and asking God to help us change our ways, we ignore it, justify it and become defensive in an attempt to minimize our sin and make ourselves feel better.

Most people don’t want to be racist, but instead of repenting and humbly working to learn and understand, they respond out of shame and shut down. I’ve often observed defensiveness and even denial in white people when someone attempts to gently let them know that they are being insensitive or to educate them about the challenges minorities face.

Instead of turning to these instinctual responses, we need to humbly admit if we’re in the wrong when it comes to race and culture and be willing to take responsibility for the harm we have caused— as well as the harm caused by our ancestors. When it comes to racism or any other sin, the only way to not only feel better but to actually become better is to repent of your sin and turn to God.

After this I looked, and there before me was a great multitude that no one could count, from every nation, tribe, people and language, standing before the throne and before the Lamb. They were wearing white robes and were holding palm branches in their hands.

BECOMING AWARE OF THE REALITY

Why is working toward racial reconciliation important? Because we live in an ethnically diverse nation with a horrific history of racism and slavery. We cannot move toward a healthy future without dealing with the past.

While some seem to believe the racism of the past is over and we just need to move on, our history still has repercussions for ethnic minorities today.

Ethnic minorities don’t have the option of deciding whether to engage in conversations about race and culture; they are thrust into difficult situations and uncomfortable conversations whether they want them or not. White people can usually choose to not engage in these conversations or situations. This is called “privilege.” It’s the privilege of not having to think about race or face the consequences of systemic racism.

For Christians, caring about your neighbors who are different from you is following the example of Jesus.

FOLLOWING THE EXAMPLE OF CHRIST

For Christians, caring about your neighbors who are different from you is following the example of Jesus.

Just as Jesus gave up His divine privilege as God to come to earth and enter into the human experience, white people, who experience privilege, need to be willing to become uncomfortable in order to better love their ethinic minority neighbors. Jesus lifted up those who were suffering from discrimination and injustice and condemned those who refused to help.

Unlike Jesus, who actually became human and experienced our struggles, white people can never truly understand the minority experience in America. Even so, it’s important to seek to understand people whose perspective and experience are different from your own. This is a first step to loving the people around you the way Jesus would.

THE BEAUTY OF DIVERSITY

It can be easy to focus on the negative when discussing issues of race because racism and discrimination have caused suffering, division and conflict. Remember that ethnicity and culture are actually wonderful things. When you are ashamed of your race, culture or ethnicity, you deny a beautiful part of how God made you.

If you’re white, you may feel ashamed because you and your ancestors have benefitted from systemic racism. If you’re an ethnic minority, you may have internalized some of the racist messages and attitudes of those around you and feel ashamed of your culture or race at times. Any form of shame about your racial or ethnic identity restricts your view of God.

God is beautiful and complex. People are made in His image, but no one person or culture can reflect the fullness of God. Every ethnicity and culture has been purposely given by God. They are so significant that they are eternal. The vision of heaven in Revelation 7:9 describes it as ethnically diverse: “After this I saw a vast crowd, too great to count, from every nation and tribe and people and language, standing in front of the throne [of God]” (New Living Translation).

God gives each of us our unique ethnic and cultural heritage for a reason. It’s a gift to be appreciated, not something to be ashamed of or to avoid. You can fully embrace the identity God has given you and respect, appreciate and support people from different backgrounds.

As you increase your cultural competence by increasing your appreciation for and understanding of cultural differences, you will also get a fuller picture of God. 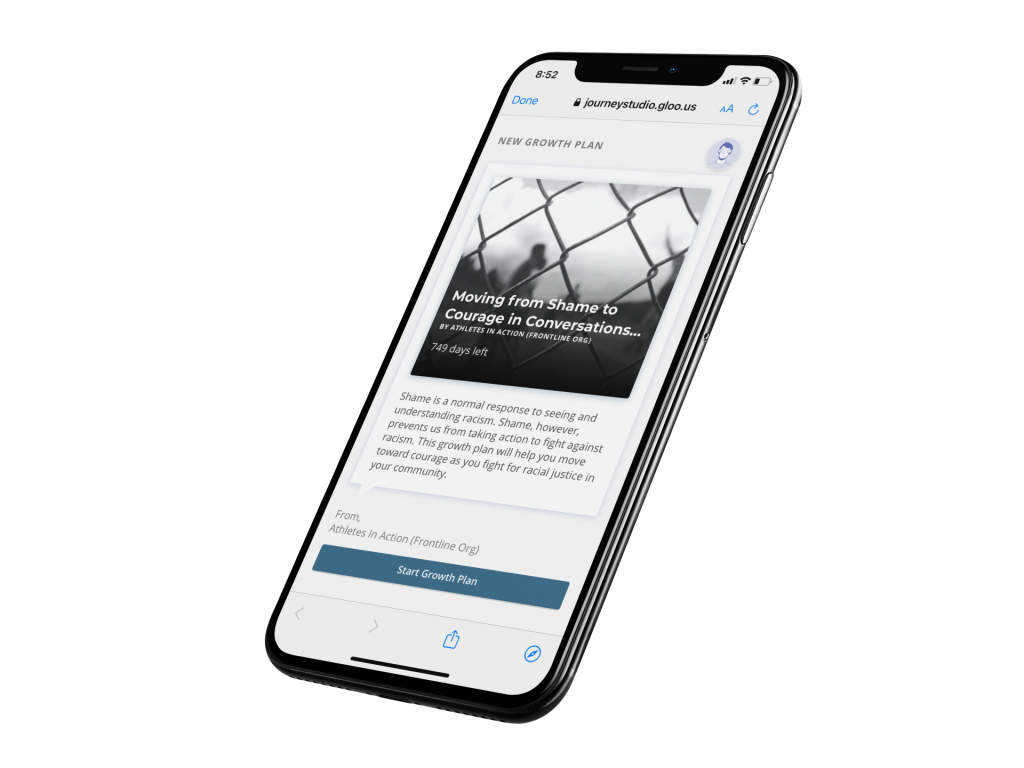 Put the principles you just read about into practice and integrate it into your life. Athletes in Action© has put together a growth plan of resources, practical steps, and reflection guides to help you move from shame to courage in the face of racism.

*To track your progress, you be asked to create a secure and private account on our hosting platform that is powered by Gloo.

Racism: What Thoughts or Feelings Come to Mind?